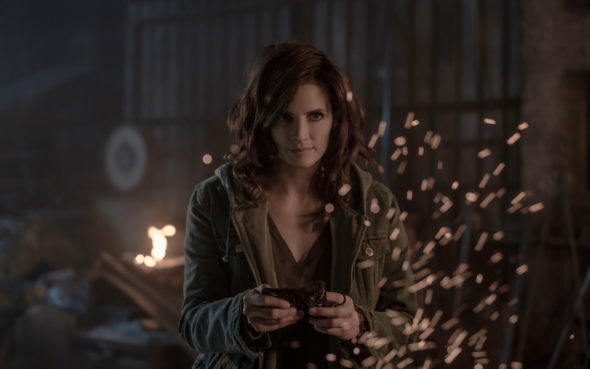 What new danger will Emily face in the third season of the Absentia TV show on Amazon? As we all know, the Nielsen ratings typically play a big role in determining whether a TV show like Absentia is cancelled or renewed for season four. Amazon and other streaming platforms, however, collect their own data. If you’ve been watching this TV series, we’d love to know how you feel about the third season episodes of Absentia here. *Status Update Below.

An Amazon Prime Video crime thriller, Absentia stars Stana Katic, Patrick Heusinger, Geoff Bell, Josette Simon, Matthew Le Nevez, Neil Jackson, Natasha Little, Paul Freeman, Patrick McAuley, and Christopher Colquhoun. The drama centers on the mysterious disappearance and return of FBI Special Agent Emily Byrne. While tracking a notorious Boston serial killer, Emily vanishes. Eventually, she is declared dead — presumed to be a victim of Conrad Harlow. Six years later, she’s discovered in a cabin in the woods, clinging to life. Emily returns home to find her husband remarried, and now she’s a suspect in a new string of murders. In season three, with Emily’s suspension from the FBI nearing its end, a criminal case hits close to home, sending her on a dangerous journey that threatens the lives of the family she is desperately trying to hold together.

What do you think? Which season three episodes of the Absentia TV series do you rate as wonderful, terrible, or somewhere between? Do you think that Absentia on Amazon should be cancelled or renewed for a fourth season? Don’t forget to vote, and share your thoughts, below.

*5/8/2021 update: Absentia has ended so there won’t be a fourth season on Amazon Prime Video.

Brilliant program I haven’t seen any thing quite so good for years I love the last episode quite a twist and it really has you gripped I wish there was a four I would work it for sure terrific actors bring them back ….??

I have really enjoyed show. Really hoping it’s is continued.o

I love Absentia! Right now there are not very many quality shows in this category. I loved watching Homeland and now Absentia has become my favorite in Homelands place. The storyline, quality of acting etc has me hooked. I’ve binged all three episodes in a week! Please renew Absentia for season 4. I see this show being run for years. Please do not let your viewers down. Between the reviews and vote they are invested in Absentia as I am.

Absentia deserves to be renewed! There are so many plot lines left to explore with Emily and Cal alone! My two most favored characters in the series are superior actors. Not bad to look at either. Please bring on a season 4!

….. I watch ABSENTIA TV Series without fail, love the Show !!! Hoping it
continues on and on and on ….. Thanks to Amazon & Stana Katic & Co.

I truly enjoyed watch this series. It has mystery, suspense and action. I can’t wait to see where Emily goes next and does she get back with her family or maybe someone is out for revenge. So many possibilities.

Abestia, s3 is brilliant. The writing, directing,producing,acting,action,stunts music, magnificent! @StanaKatic brilliantly portrays Emily Byrne and cast did such a great job that we definitely need a s4. Renew please, it’s that good!

I’ve really enjoyed all 3 seasons of Absentia. I’ve Seasons 1 and 2 on DVD and looking forward to buying DVD set of S 3. I definitely want a Season 4. There’s heaps more scope for episodes.

We watched all 3 Seasons in 5 days & loved it. We definitely want It to be renewed!

Love the show !!! Binged watch all 3 seasons. Amazon should renew it.All the episodes were good. Emily is one” bad a** character mom”