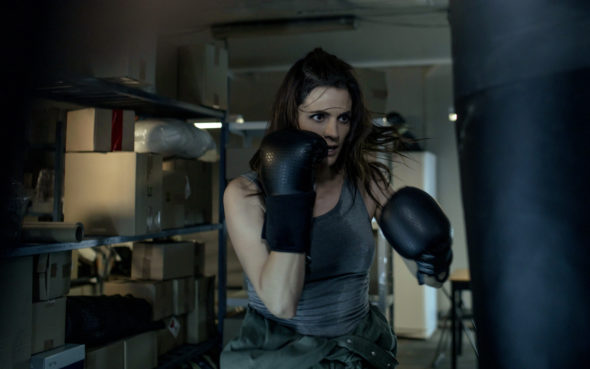 It looks like Emily’s troubles are over.  The creative team of the Absentia TV series has decided not to make a fourth season of the Amazon Prime Video show. The third season was released in July of last year on the streaming service.

A crime thriller, the Absentia series stars Stana Katic, Patrick Heusinger, Geoff Bell, Josette Simon, Matthew Le Nevez, Neil Jackson, Natasha Little, Paul Freeman, Patrick McAuley, and Christopher Colquhoun. The drama centers on the mysterious disappearance and return of FBI Special Agent Emily Byrne. While tracking a notorious Boston serial killer, Emily vanishes. Eventually, she is declared dead — presumed to be a victim of Conrad Harlow. Six years later, she’s discovered in a cabin in the woods, clinging to life. Emily returns home to find her husband remarried, and now she’s a suspect in a new string of murders. In season three, with Emily’s suspension from the FBI nearing its end, a criminal case hits close to home, sending her on a dangerous journey that threatens the lives of the family she is desperately trying to hold together.

Katic, who is also an executive producer on the show, took to social media to announce the series’ end and to thank the cast, crew, and fans for their support.

To our #ABSENTIA Wolfpack:

When they asked me in January 2017 if I was ready to spend 3 years in Bulgaria shooting a cable TV series, I had no idea what I was in for. I could never have imagined the creative partnerships and the friendships that would form and enrich my life.

Three Seasons was the perfect amount of space for a beautiful, complicated and wonderfully fulfilling journey. We took our protagonist on the path of victim to survivor to … empowered architect of her own future, which is a journey I hope we can all have after this confounding year.

And although we’ve danced with the idea of continuing the tale, “ABSENTIA” was always meant to be only 3 seasons, & I couldn’t think of a better note to end on… for any person on this planet, but especially Emily and her loved ones.

I’m proud of our team for bringing themselves to this project in order to bring life to “Absentia.” Thank you to Sony, Amazon, AXN, Showcase & all affiliates for your support of our special show.

A big shout-out to all of our stellar directors, to exec producer, Julie Glucksman, and to our showrunner Will Pascoe. You all led with heart and passion; and Will, I sincerely hope the studio will take you up on your offer to pen a graphic novel version of Absentia. 😉

To our audience, I want to say thank you from the bottom of my heart for joining us on this special journey. It is because of YOU that our show was a great success for its broadcasters. It’s because of YOU that we get to entertain you and be storytellers. And whatever projects this tribe of rebel storytellers goes to next, I hope you’ll follow them all.

Last but not least, to my cast and crew, it’s been an honor—you are all the best in the business. And I mean that wholeheartedly. Here’s to the next time! xS

What do you think? Have you enjoyed the Absentia TV series? Are you disappointed that the series won’t return for a fourth season or, do you agree that season three is a good place to end the story?

Good show should do one last season and finalize thjngs

I would loved to see other seasons it was such a rare great serie its sad it had to end!

This was a great series, so sorry that it was canceled. Great plot and acting. I hope they change their mind and decide to have a season 4.

I’m really sorry to see the show has ended! I would have liked for Emily to be reunited with her son permanently. I think Season 4 could have been interesting, and hopefully Emily could be with her son. She missed so much of his life…why save her just to be taken away again from her family. I really like the show! Sorry to see it go!

Personally I found the series to be way too predictable. The relationships all too easy to predict. Also, a mother would never just let go of her son like that and the relationship with that ugly guy she ends with is not believable. The only ending that would of made sense and believable would of been the 3 of them reunited. I won’t miss this series, poorly written and forgettable.

I absolutely was taken by all episodes and disheartened to read that the show has ended. This show is outstanding and I hate that it won’t continue!

Why on earth would absentia be canceled?

There is so much rubbish on the various streaming services, therefore it was disappointing to learn there will not be a series 4 of this excellent production 🙁

I would have happily kept watching if there were more. I can think of story arcs I would have found riveting, the actors were so good. I do respect their decision though and will take Stana’s advice and look out for other such productions. Thank you for the experience.

I and my family watched it in two days and it should not have ended this way. There is so much more to be done. They should at least do what they did with six others shows. Bring it back with three two hour EPs to then say that’s how it ends!

I was so amazed by this show! One of the best shows I have ever watched. I wish there was another season or more. I truly enjoyed every bit and detail. Bring it back! Please