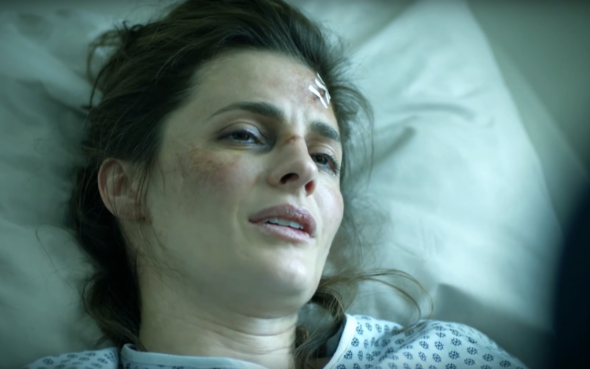 “You’re not the one who was taken.” Amazon has announced the premiere date for their upcoming TV show Absentia.

The crime thriller “centers on FBI agent Emily Byrne (Katic). While hunting one of Boston’s most notorious serial killers, Agent Byrne disappears without a trace and is declared dead. Six years later, Emily is found in a cabin in the woods, barely alive, and with no memory of the years she was missing.” The cast also includes Patrick Heusinger, Cara Theobold, Neil Jackson, Angel Bonanni, Richard Brake, and Ralph Ineson.

On Friday, February 2, Amazon will premiere all ten episodes of original dramatic series Absentia, starring and executive produced by Castle’s Stana Katic, on Prime Video. This marks Katic’s first leading television role since Castle, which she won a People’s Choice Award for in 2016 for Favorite TV Crime Drama Actress. Absentia centers on FBI agent Emily Byrne (Katic). While hunting one of Boston’s most notorious serial killers, Agent Byrne disappears without a trace and is declared dead. Six years later, Emily is found in a cabin in the woods, barely alive, and with no memory of the years she was missing. Returning home to learn her husband has remarried and her son is being raised by another woman, she soon finds herself implicated in a new series of murders.

Absentia also stars Patrick Heusinger (Jack Reacher: Never Go Back) as Emily’s husband and fellow FBI agent Nick who struggles with the guilt that he stopped looking for Emily, and his feelings for her that have resurfaced – especially now that he’s married to another woman. Nick is now tasked with the unthinkable: having to bring Emily into custody as the prime suspect in a string of shocking new murders. Forced to prove her innocence, Emily goes on the run. But the closer Emily gets to answers, the more she puts herself and her family in danger. Can she prove her innocence before it is too late and discover the truth about her abduction? In addition to Katic and Heusinger, other cast members include Cara Theobold (Downton Abbey), Neil Jackson (Sleepy Hollow), Angel Bonanni (False Flag), Richard Brake (Game of Thrones), Ralph Ineson (Game of Thrones), Paul Freeman (The Dogs of War), Bruno Bichir (Narcos) and Patrick McAuley (The Conjuring 2).

Absentia is produced by Masha Productions and distributed by Sony Pictures Television in association with Sony Pictures Television Networks. The series is executive produced and directed by Oded Ruskin (False Flag), alongside executive producers Matt Cirulnick (South Beach), Julie Glucksman, Katic and Maria Feldman (False Flag, Fauda). The series was created by Gaia Violo and Cirulnick and is based on a pilot script originally written by Violo.”

What do you think? Are you a fan of crime thrillers? Will you watch Absentia?