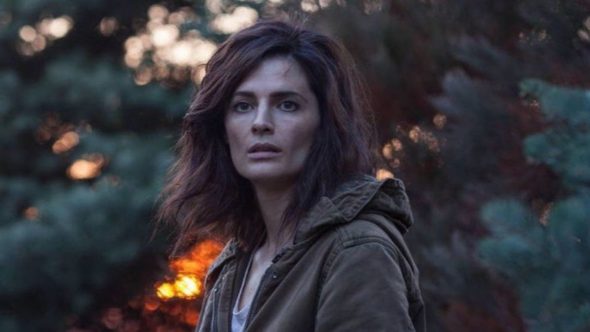 The mystery continues. Recently, Corus Entertainment announced the AXN TV show Absentia has been renewed for a second season.

The thriller drama, which airs on Amazon in the U.S., centers on an FBI agent who is found in a cabin in the woods years after mysteriously disappearing. Stana Katic, Patrick Heusinger, Cara Theobold, Neil Jackson, Angel Bonanni, Richard Brake, Ralph Ineson, Paul Freeman, Bruno Bichir, and Patrick McAuley star.

Ten episodes have been ordered for season two of Absentia. It’s currently unclear if Prime Video will pick up the new season of the series, but we will post updates as soon as they become available.

Corus continues to dominate the entertainment specialty landscape, owning over half of the Top 20* and seven of the Top 10 channels* including W Network, Showcase, HISTORY®, HGTV Canada and YTV. As the leader in kids programming, Corus owns all of the Top 5 kids channels***.

Below is a breakdown of Corus’ new and returning series across its specialty networks:

Fresh off its biggest fall season in 13 years****, and ranked as the #1 entertainment specialty network*, W Network delivers captivating dramas with four highly-anticipated series including drama All American, supernatural series Charmed based on the original series, Roswell, New Mexico based on the Roswell High book series and the buzzed-about Pretty Little Liars: The Perfectionists.

All American – Season 1 (22×60) – NEW SERIES
Leading W Network’s standout line up this fall is drama All American. Spencer James (Daniel Ezra), is a rising high school football player and “A” student at South Crenshaw High. Compton is the place he calls home. But when Beverly High School’s football coach Billy Baker (Taye Diggs, Private Practice) recruits him to join his team in Beverly Hills, Spencer’s mother, Grace (Karimah Westbrook), and his best friend, Coop (Bre-Z), convince Spencer it’s an opportunity he has to seize. Now Spencer must navigate two worlds, the south side neighborhood that he knows and the affluent Beverly Hills world that has offered him an opportunity for something bigger.

Charmed – Season 1 – NEW SERIES
The supernatural saga Charmed comes to W Network this fall. When Melanie “Mel” Vera (Melonie Diaz, The Breaks) and her sister Maggie (Vancouver-native Sarah Jeffery, Disney Channel’s Descendants) lose their mother in a horrifying accident, it shatters their world and threatens their sibling bond. Then they get another huge shock: they have an older sister, brilliant geneticist Macy (Madeleine Mantock, The Tomorrow People), whom their mother kept a secret all these years. With the emotions of the newly-reunited sisters running high, each of the girls suddenly exhibit impossible new abilities. But don’t worry, there’s a perfectly reasonable explanation…or so says Harry Greenwood when he gathers the three sisters together to reveal they’re actually powerful witches, as was their mother.

Roswell, New Mexico – Season 1 (13×60) – NEW SERIES
More than maybe anywhere else on Earth, Roswell, New Mexico is ground zero for those who seek proof that aliens exist. Roswell native Liz Ortecho (Jeanie Mason, Grey’s Anatomy) left it all behind 10 years ago, after the death of her beloved older sister, Rosa. But with her father ailing, she reluctantly returns to her tourist-trap hometown to move back in with him. When Liz arrives, she reconnects with Max Evans (Nathan Parsons, The Originals), her teenage crush who is now a Roswell police officer. Their chemistry is instantly electric. But Liz soon discovers a shocking truth: Max is an alien who has kept his unearthly abilities hidden his entire life, along with those of his otherworldly siblings, Isobel and Michael. Roswell, New Mexico premieres on W Network this winter.

Pretty Little Liars: The Perfectionists – Season 1 (10×60) – NEW SERIES
Fans of Pretty Little Liars have a new mystery to solve, and this time it involves a murder in the college town of Beacon Heights, where everything is not as perfect as it seems. Featuring the return of series stars Sasha Pieterse and Janel Parrish, the series tells the story of a town of overachievers who are under an intense amount of pressure to succeed. When their high-stakes college environment pushes them to a breaking point, someone snaps. And kills someone. As they work together to solve the murder mystery, it soon becomes clear that behind every Perfectionist is a secret, a lie – and a needed alibi. The mysterious drama Pretty Little Liars: The Perfectionists debuts in 2019.

Outlander – Season 4 (13×60) – NEW SEASON
A massive hit with audiences, ranking as the #3 series against all entertainment specialty programs (A25-54)**, the critically-acclaimed love story Outlander returns for Season 4 this fall. Based on the best-selling series of novels by Diana Gabaldon, the series stars Caitriona Balfe as Claire and Sam Heughan as Jamie.

The Good Fight – Season 3 – NEW SEASON
With the world going insane and the Chicago murder rate on the rise, Diane, Lucca, Maia and the rest of the law firm find themselves under psychological assault when a client at another firm kills his lawyer for overcharging. After a copycat murder, the firm begins to look at its own clients suspiciously. Meanwhile, Diane battles with a new partner at the firm, Liz Reddick-Lawrence (Audra McDonald). And Maia becomes harder and tougher after her parents’ scandal puts her on trial. Finally, Lucca is brought back into Colin’s orbit.

Legacies – Season 1 (13×60) – NEW SERIES
Debuting this fall on Showcase, new supernatural teen soap Legacies continues the story of the iconic heroes and villains of The Vampire Diaries and The Originals. Legacies follows the story of the next generation of supernatural beings at The Salvatore School for the Young and Gifted. It’s here that Klaus Mikaelson’s daughter, 17-year-old Hope Mikaelson (Danielle Rose Russell, The Originals); Alaric Saltzman’s twins, Lizzie (Jenny Boyd) and Josie Saltzman (Kaylee Bryant, Criminal Minds); and other young adults – including political scion MG and the mysterious Landon Kirby (Aria Shahghasemi) – come of age in the most unconventional way possible, nurtured to be their best selves…in spite of their worst impulses.

Marvel’s Runaways – Season 2 (13×60) – NEW SEASON
Runaway hit and Top 10 entertainment specialty program** Marvel’s Runaways returns for a second season later this year. The series follows the story of six diverse teenagers who can barely stand each other but who must unite against a common foe – their parents.

Supergirl – Season 4 (22×60) – NEW SEASON
The action-adventure drama, Supergirl, based on DC character Kara Zor-El (Melissa Benoist) soars back onto Showcase this fall. Twelve-year-old Kara escaped the doomed planet Krypton and was sent to Earth where she was raised by a foster family. Kara grew up in the shadow of her foster sister, Alex (Chyler Leigh), and learned to conceal the phenomenal powers she shares with her famous cousin, Superman, in order to keep her identity a secret. Years later, Kara was living in National City and still concealing her powers, when a plane crash threatened Alex’s life and Kara took to the sky to save her. Now, Kara balances her work as a reporter for CatCo Worldwide Media with her work for the Department of Extra-Normal Operations (DEO), a super-secret government organization whose mission is to keep National City – and the Earth – safe from sinister threats.

The Sinner – Season 2 (8×60) – NEW SEASON
The second installment of Top 5 entertainment specialty program** and executive produced by Jessica Biel, The Sinner, debuts early this fall. In Season 2, Detective Harry Ambrose (Bill Pullman) is lured back to his hometown in rural New York to assess an unsettling and heart wrenching crime – parents murdered by their 11-year-old son, with no apparent motive. As Ambrose realizes there’s nothing ordinary about the boy or where he came from, the investigation pulls him into the hidden darkness of his hometown. He’s pitted against those who’ll stop at nothing to protect its secrets — and the mysterious Vera (Carrie Coon) who proves to be a complicated, enigmatic piece to this haunting puzzle.

Channel Zero: The Dream Door – Season 2 (6×60) – NEW SEASON
Based on the “creepypasta” short story Hidden Door by Charlotte Bywater, Channel Zero: The Dream Door follows newlyweds Jillian (Maria Sten, Straight Outta Compton) and Tom (Brandon Scott, Grey’s Anatomy), who have each brought secrets into their marriage. When they discover a strange door in their basement, those secrets start to threaten their relationship – and their lives.

The Magicians – Season 4 (13×60) – NEW SEASON
Based on Lev Grossman’s bestselling novels, The Magicians centers on Quentin Coldwater (Jason Ralph) and his 20-something friends as they are thrust into the unfamiliar world of the beautifully enchanting yet mysteriously dangerous Fillory – and places beyond – where they must draw upon their novice skills to save the existence of magic. The series, produced by Universal Cable Productions, stars Ralph, Stella Maeve, Olivia Taylor Dudley, Hale Appleman, Arjun Gupta, Summer Bishil, Rick Worthy and Jade Tailor.

Besties – Season 1 (10×30) – NEW SERIES
Premiering in 2019, Besties is a multi-camera sitcom that explores friendship, identity, race, and class as two lifelong best friends use each other to get through some of the toughest challenges that they will ever face – figuring out who they are and who they want to be.

Good Trouble – Season 1 (13×60) – NEW SERIES
New series Good Trouble follows Callie (Maia Mitchell, The Fosters) and Mariana (Cierra Ramirez, The Fosters) as they embark on the next phase of their young adult lives in Los Angeles, debuting in 2019.

The Bold Type – Season 3 (10×60) – NEW SEASON
A third season of The Bold Type this 2019 reveals a glimpse into the outrageous lives and loves of those responsible for the global women’s magazine, “Scarlet.” The rising generation of Scarlet women leans on one another as they find their own voices in a sea of intimidating leaders. Together they explore sexuality, identity, love and fashion.

Siren – Season 2 (16×60) – NEW SEASON
Siren, the #1 ranked program on ABC Spark (A25-54 & A18-34)*****, returns for a second season in 2019. Siren takes viewers inside Bristol Cove – a coastal town known for its legend of once being home to mermaids. When the arrival of a mysterious girl proves this folklore all too true, the battle between man and sea takes a very vicious turn as these predatory beings return to reclaim their right to the ocean.

What do you think? Have you seen Absentia? Will you watch season two?

Season 2, episode 2 is giving false info to public about diabetes. It promotes giving a full syringe of insulin to an unresponsive diabetic. PLEASE make a 2o second phone call to a health professional before putting dangerous info into your storyline. There are over 1.2 million insulin dependent diabetics in the U.S. alone. NEVER EVER treat without checking blood sugar first. Chances are, if we’ve fainted it’s because we’ve already taken too much insulin. Your character has now killed her mother!

I just saw Season 2 airs on Amazon in June. I guess it aired in Canada on AXN this month? (March).

I watch season 1 of Absentia and it was great. I will watch season 2. It is a great show. I do not know why it is taking so long for Amazon to place it on it renewal list for the US.

Yes I did watch Absentia and found it thoroughly enjoyable! Very intriguing storyline and excellent performances! Looking forward to the follow up! I hadn’t really watched Showcase before but once I watched this drama I stayed tuned to other shows on the station and was pleasantly surprised by the high quality entertainment overall!