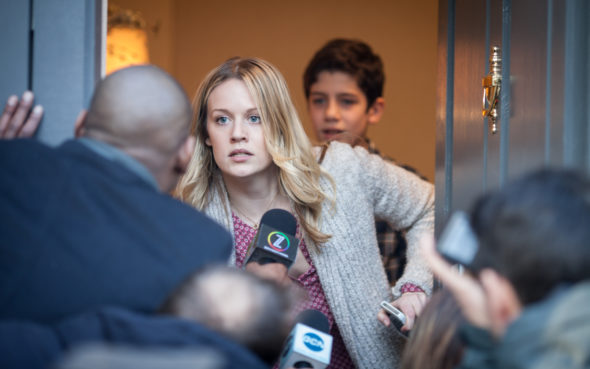 Does Emily Byrne manage to reclaim her life during the first season of the Absentia TV show on Amazon? As we all know, the Nielsen ratings typically play a big role in determining whether TV shows are cancelled or renewed. Amazon and other streaming platforms, however, collect their own data. If you’ve been watching this TV series, we’d love to know how you feel about the Absentia season one episodes. We invite you to rate them for us here.

What do you think? Which season one episodes of the Absentia TV series do you rate as wonderful, terrible, or somewhere between? Should Amazon cancel or renew Absentia for a second season? Don’t forget to vote, and share your thoughts, below.

Please give us season 2. I am completely hooked.

Hoping for a Session 2. Love how it kept you guessing.

Incredible exciting show!! We can’t wait for a Season 2
!!

Fantastic, bring back season 2. Husband and I can’t wait to see some more

Fantastic thriller.has you on the edge of your seat by the end of each episode.and waiting to see the next.completely different level of talent and drama…and I really loved castle and miss it but nothing light hearted about this one.can’t wait for season 2.

Absentia kept me riveted from the first moment to the last ten episodes later, not just the first time I watched but the second and third as well. Stana Katic is simply magnificent and spellbinding as Emily, the rest of the actors are solid, and the story, although some aspects were implausible, carried this viewer along. As much a love story between mother and child and the complexities of the human heart as it is a thriller, Absentia is a terrific show. Please support a season 2.

Very good actress. Loved her is Castle. Good story. Hoping for a Session 2.

I watched them all, she is as good , just like she was in Castle. As I watched I was waiting for Rick to show up.

Good thriller – Stana is amazing – hope she can win an EMMY on this. Hoping for a Season 2 for some answers to some questions.