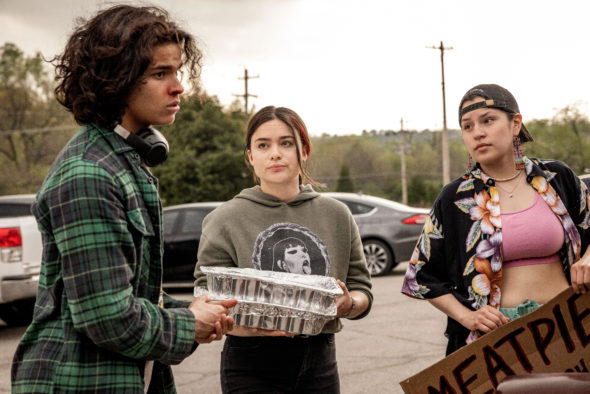 Will this gang achieve their dream? Has the Reservation Dogs TV show been cancelled or renewed for a second season on FX on Hulu? The television vulture is watching all the latest cancellation and renewal news, so this page is the place to track the status of Reservation Dogs, season two. Bookmark it, or subscribe for the latest updates. Remember, the television vulture is watching your shows. Are you?

Unless they decide to publicize viewership, it is difficult to predict whether FX on Hulu will cancel or renew Reservation Dogs for season two. Since Hulu isn’t ad-supported (for the most part), the streaming service can take a chance on series it believes in and stories that need telling, but sooner or later it comes down to production costs, versus viewership numbers. I’ll keep my ears open and an eye out for news, and will update this page with breaking developments. Subscribe for free alerts on Reservation Dogs cancellation or renewal news.

9/3/21 update: Reservation Dogs has been renewed for a second season.

What do you think? Are you glad that the Reservation Dogs TV show has been renewed for a second season? How would you feel if FX on Hulu had cancelled this TV series, instead?

I am looking forward to season 2. Don’t fail me now Hulu.

Great show..I hope there are a lot more episodes! Sort of reminds me of Shameless. Please renew!

I have really enjoyed the first three episodes.