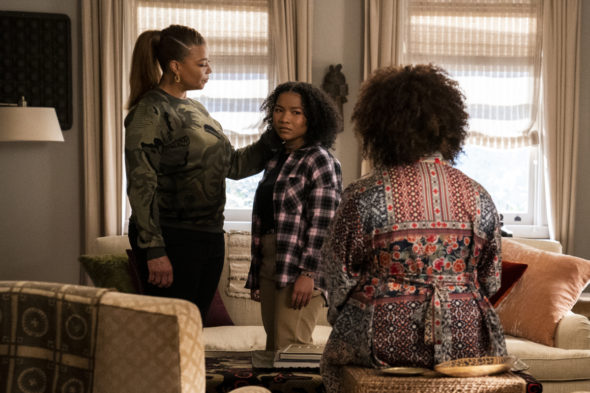 How long can Robyn keep this up? Has The Equalizer TV show been cancelled or renewed for a third season on CBS? The television vulture is watching all the latest cancellation and renewal news, so this page is the place to track the status of The Equalizer, season three. Bookmark it, or subscribe for the latest updates. Remember, the television vulture is watching your shows. Are you?

Airing on the CBS television network, The Equalizer TV show stars Queen Latifah, Chris Noth, Lorraine Toussaint, Tory Kittles, Liza Lapira, Adam Goldberg, and Laya DeLeon Hayes. The story follows Robyn McCall (Latifa), an enigmatic woman with a mysterious background. She uses her extensive skills as a former CIA operative to help those with nowhere else to turn. To most, Robyn appears to be just an average single mom who is quietly raising her daughter (Hayes) and living with her aunt (Toussaint). However, to a trusted few, Robyn is The Equalizer, an anonymous guardian angel and defender of the downtrodden, who’s also dogged in her pursuit of personal redemption. Joining Robyn as champions of justice are her longtime friend and former CIA handler (Noth), an edgy bar owner and past colleague (Lapira), and a paranoid and brilliant white-hat hacker (Goldberg). As Robyn aids the oppressed and exploited, her vigilante work garners the attention of a shrewd NYPD Detective (Kittles). He once sought to uncover her identity, but now respects the need for Robyn’s type of justice, even as he often questions her methods.

The second season of The Equalizer averaged a 0.61 rating in the 18-49 demographic and 6.89 million viewers in the live+same day ratings. Compared to season one, that’s down by 49% in the demo and down by 22% in viewership in the live+same day ratings (including DVR playback through 3:00 AM). It’s worth noting that the post-Super Bowl season debut drew a 5.08 demo with 20.40 million viewers so that definitely skewed the season averages. While these numbers don’t include further delayed or streaming viewing, they are a very good indicator of how a show is performing, especially when compared to others on the same channel. Though other economic factors are involved, the higher-rated shows usually get renewed and the lower-rated ones get cancelled. Find out how The Equalizer stacks up against other CBS TV shows.

Will CBS cancel or renew The Equalizer for season three? This series had a great launch last season following the Super Bowl and it performed pretty well for the rest of the season. The network has few female-led shows and this one fits well with the rest of the CBS programming so, I think it’s a safe bet for renewal. I’ll update this page with breaking developments. Subscribe for free alerts on The Equalizer cancellation or renewal news.

5/6/2022 update: The Equalizer has been renewed through season four by CBS.

What do you think? Are you glad that The Equalizer TV show has been renewed for a third season? How would you feel if CBS had cancelled this TV series, instead?

Love the show would be hart broken if it was canceled

This is a great show please don’t cancel. There are plenty disappoints new to CBS but this show with the Queen has got to be one of the best.