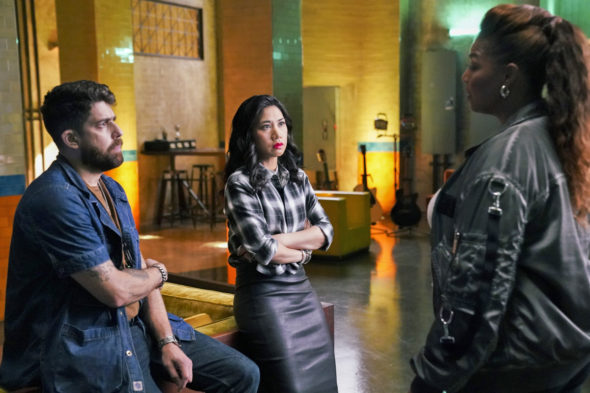 Robyn and her crew will be back to help those in need for both the 2022-23 and the 2023-24 network TV seasons. CBS has renewed The Equalizer for two years, seasons three and four. The current second season will finish on May 15th.

An action crime series, The Equalizer TV show stars Queen Latifah, Chris Noth, Lorraine Toussaint, Tory Kittles, Liza Lapira, Adam Goldberg, and Laya DeLeon Hayes. The story follows Robyn McCall (Latifa), an enigmatic woman with a mysterious background. She uses her extensive skills as a former CIA operative to help those with nowhere else to turn. To most, Robyn appears to be just an average single mom who is quietly raising her daughter (Hayes) and living with her aunt (Toussaint). However, to a trusted few, Robyn is The Equalizer, an anonymous guardian angel and defender of the downtrodden, who’s also dogged in her pursuit of personal redemption. Joining Robyn as champions of justice are her longtime friend and former CIA handler (Noth), an edgy bar owner and past colleague (Lapira), and a paranoid and brilliant white-hat hacker (Goldberg). As Robyn aids the oppressed and exploited, her vigilante work garners the attention of a shrewd NYPD Detective (Kittles). He once sought to uncover her identity, but now respects the need for Robyn’s type of justice, even as he often questions her methods.

Airing on Sunday nights, the second season of The Equalizer averages a 0.61 rating in the 18-49 demographic and 6.92 million viewers in the live+same day ratings. Compared to season one, that’s down by 48% in the demo and down by 21% in viewership in the live+same day ratings (including DVR playback through 3:00 AM).  It ranks fourth when compared to CBS’ other scripted series. In the live+7 day ratings, the season is averaging a 0.92 demo with 9.44 million, picking up 50% and 36% more viewers in the respective categories.

CBS announced today that it has renewed the hit drama THE EQUALIZER, starring Queen Latifah, for two additional years, beginning with the 2022-2023 broadcast season. THE EQUALIZER is Sunday’s #1 scripted series. The series originally premiered Feb. 7, 2021, following the Super Bowl. Additional renewals will be announced in the coming weeks.

“THE EQUALIZER continues to pack a powerful punch on Sunday nights, and we’re thrilled to have it back for two more seasons,” said Thom Sherman, senior executive vice president of programming at CBS Entertainment. “The success of THE EQUALIZER is due to the sum of its parts – an outstanding cast led by the superb Queen Latifah, plus the exceptional creative team that has continued to evolve their storytelling with a compelling mix of everyday justice, family dynamics and real-world issues that connect and resonate with audiences.”

What do you think? Have you tuned in for The Equalizer TV show on CBS? Are you glad that the series has been renewed for seasons three and four?

Great news. We love “The Equalizer” Well done CBS . We’ll keep watching and getting others to watch. Thank YOU CBS!

Great show, very entertaining, gives me something to look forward to. Hate Bishop had to leave, however. Can’t wait til next season!

They have desecrated my childhood memories of Shakespearean actor Edward Woodward as The Equalizer. Another remake checking all the boxes. Epic failure.

Glad to know that the show has been renewed.

…The renewal of the Equalizer..Go Queen!

LOVE this show! Glad to see it’s been renewed.

Yet another UNBELIVABLE show! Watched it twice.

I love Queen Latifah and this series is my go to on Sunday nights.

They made the correct decision this series is wonderful for families or anyone. It stays true to the things that do happen daily with all our government agencies.