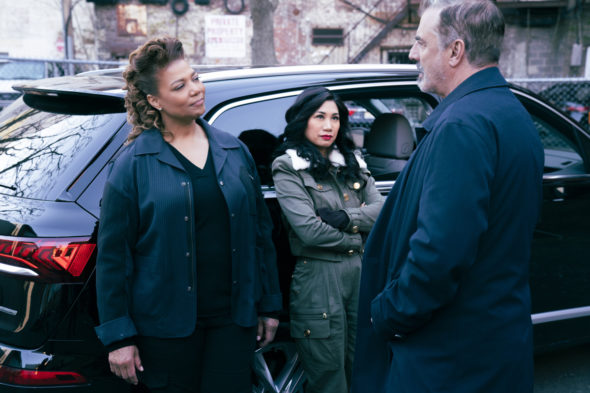 Do the ends justify the means in the second season of The Equalizer TV show on CBS? As we all know, the Nielsen ratings typically play a big role in determining whether a TV show like The Equalizer is cancelled or renewed for season three. Unfortunately, most of us do not live in Nielsen households. Because many viewers feel frustrated when their viewing habits and opinions aren’t considered, we invite you to rate all of the second season episodes of The Equalizer here.  *Status Update Below.

A CBS action crime series, The Equalizer TV show stars Queen Latifah, Chris Noth, Lorraine Toussaint, Tory Kittles, Liza Lapira, Adam Goldberg, and Laya DeLeon Hayes. The story follows Robyn McCall (Latifa), an enigmatic woman with a mysterious background. She uses her extensive skills as a former CIA operative to help those with nowhere else to turn. To most, Robyn appears to be just an average single mom who is quietly raising her daughter (Hayes) and living with her aunt (Toussaint). However, to a trusted few, Robyn is The Equalizer, an anonymous guardian angel and defender of the downtrodden, who’s also dogged in her pursuit of personal redemption. Joining Robyn as champions of justice are her longtime friend and former CIA handler (Noth), an edgy bar owner and past colleague (Lapira), and a paranoid and brilliant white-hat hacker (Goldberg). As Robyn aids the oppressed and exploited, her vigilante work garners the attention of a shrewd NYPD Detective (Kittles). He once sought to uncover her identity, but now respects the need for Robyn’s type of justice, even as he often questions her methods.

What do you think? Which season two episodes of The Equalizer TV series do you rate as wonderful, terrible, or somewhere between? Do you think that The Equalizer should be cancelled or renewed for a third season on CBS? Don’t forget to vote, and share your thoughts, below.

*5/6/2022 update: The Equalizer has been renewed through season four by CBS.

The show THE EQUALIZER is Fantastic. My family knows not to even ask me anything when it comes on. CBS did great with that n even the line up following. N if for some reason I can’t watch I always set to record..

I cherry pick only a few TV shows to watch and this is one of them. It opened my eyes to see how the police in small towns behave. I live in Canada where there is not a big population of black people.

I don’t answer the phone when I’m watching the Equalizer. It’s TERRIFIC, morally satisfying, and the cast and themes are uplifting. The Queen is Noble; I’d like a daughter like her’s, and we all want an Aunt Vi. Renew it!

I love the Equalizer, it is a great show,. I love the story lines, the action and the way they all communicate with one another. I would be heart broken if they did not renew. This is what we need more shows with woman in action,