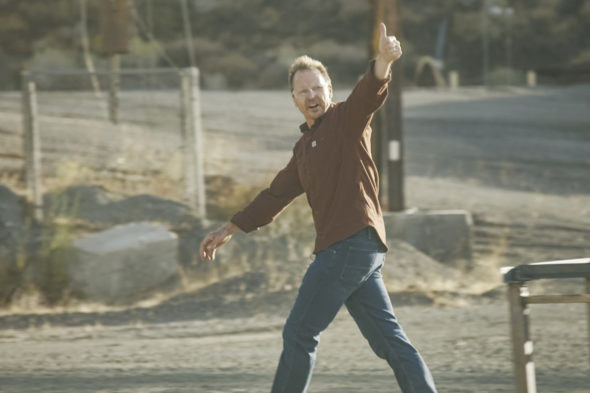 It’s back to work for Phil Keoghan and his crew. The CBS network has renewed the Tough As Nails series for seasons three and four. It’s unclear if the network will air one or two seasons a year (as they do with Survivor). The program’s second season finale airs tonight.

The Tough As Nails TV show is hosted by Keoghan of The Amazing Race. The series celebrates everyday Americans who roll up their sleeves and don’t think twice about working long hard hours and getting their hands dirty, in order to keep their country running. In the show, competitors consider the calluses on their hands a badge of honor and are tested for their strength, endurance, life skills and, most importantly, mental toughness in challenges that take place at real-world job sites. Even after they “punch out” of the individual competition, they will have the opportunity to win additional prizes in the team competitions that continue throughout the season. At the end of the season, the winning individual contestant will be crowned as the Tough as Nails champion and will win a $200,000 cash prize and a new 2021 Ford F150 truck.

Airing on Wednesday nights, the second season of Tough As Nails averages a 0.46 rating in the 18-49 demographic and 3.18 million viewers. Compared to season one, that’s down by 8% in the demo and down by 6% in viewership.

Here’s the renewal announcement from CBS, as well as a link on how you can apply:

CBS announced today that TOUGH AS NAILS, the reality competition series celebrating hardworking Americans who are not afraid to roll up their sleeves and get their hands dirty, has been renewed for seasons three and four. The series is created by Emmy Award-winning producer Phil Keoghan and his producing partner Louise Keoghan, who are also executive producers. Phil Keoghan is the host.

“TOUGH AS NAILS is the right show at the right time, especially over the last year as we have all become a little tougher and have a deeper appreciation for the many people who keep our communities running,” said Mitch Graham, Senior Vice President, Alternative Programming, CBS Entertainment. “With Phil Keoghan’s inspired touch as creator and host, he and his team have established an uplifting show that highlights toughness in many forms with unique real-world challenges and remarkable competitors. The show has resonated with viewers and we are excited to continue to shine a light on the hardworking Americans who get the job done.”

“For the first time in a long time we have started paying attention to those who make America work and what’s really important in life. TOUGH AS NAILS is about acknowledging and validating those who may have felt forgotten for so long,” said host, creator and showrunner Phil Keoghan. “I encourage everyone to make an extra effort to thank our essential workers. It’s a genuine gesture that will continue to unite us.”

TOUGH AS NAILS is a competition series that celebrates everyday Americans who get their workout on the job rather than the gym, wear work boots instead of workout shoes and consider the calluses on their hands a badge of honor. Competitors are tested for their strength, endurance, agility and mental toughness in challenges that take place at real world job sites. One by one, they are eliminated until the TOUGH AS NAILS winner is named, but nobody goes home. Even after they “punch out” of the individual competition, they have the opportunity to win additional prizes in the team competitions that continue throughout the season. The series redefines what it means to be tough, proving that it comes in all shapes and sizes.

Casting for the upcoming seasons has begun. Those who would like to apply to be a challenger can visit https://www.toughasnailscbscasting.com/home.

TOUGH AS NAILS is produced by Raquel Productions Inc. in association with Tough House Productions Inc. Created by Phil Keoghan and Louise Keoghan who are executive producers with Anthony Carbone.

What do you think? Do you enjoy this competition series? Are you planning to watch the third and fourth seasons of Tough As Nails on CBS?

Yes… ready for seasons 3 and 4

We love this show! It’s become one of our favorites!