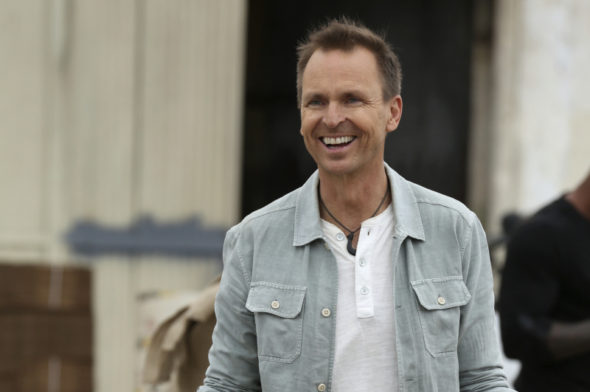 Now that CBS is only airing one cycle of The Amazing Race each season, host Phil Keoghan and his wife Louise seem to have had time to develop a new competition TV show called Tough as Nails. CBS has ordered the show to series and it spotlights “real people who are real tough in real life, as a result of their physically demanding everyday jobs.” Phil Keoghan will host. The network has ordered 10 episodes but has not indicated when it will premiere.

Here are some additional details (including a website for those who want to be on the show):

Phil Keoghan to Serve as Host

CBS has ordered TOUGH AS NAILS, a new 10-episode competition series that throws the spotlight on real people who are real tough in real life, as a result of their physically demanding everyday jobs, from Emmy Award-winning producer Phil Keoghan (THE AMAZING RACE) and his producing partner, Louise Keoghan. Phil Keoghan will also serve as host.

TOUGH AS NAILS is about competitors who consider the calluses on their hands a badge of honor. They will be tested for their strength, endurance, agility and mental toughness in challenges that take place in the real world. One by one, they will be eliminated until the TOUGH AS NAILS winner is named. The series will redefine what it means to be tough, proving that it comes in all shapes and sizes, and will celebrate Americans who roll up their sleeves 24/7 and don’t think twice about working long hard hours and getting their hands dirty, in order to keep their country running.

“TOUGH AS NAILS was inspired by my proud working class family of farmers, gold miners, builders and coalminers,” said host and executive producer Phil Keoghan. “I was lucky enough to spend my school holidays working alongside my grandfather, an A-grade mechanic, World War II aero mechanic, gunsmith and inventor. I’m excited to celebrate the skills of those who sweat on factory floors instead of gym floors, and those who wear work boots instead of workout shoes.”

Phil Keoghan is also the host and an executive producer of the multiple Emmy Award-winning reality competition series THE AMAZING RACE, on the Network, the host of “National Geographic Explorer” and host of his podcast, “BUCKiT with Phil Keoghan.”

His work has earned him numerous awards, including 10 primetime Emmy Awards as a producer of THE AMAZING RACE, Best Director Award at the American Documentary Film Festival, the 2018 Sports Documentarian Award from the International Sports Hall of Fame, the Dorothy Corwin Spirit of Life Award for services to MS, a 2012 Sir Peter Blake Leadership Award, and the Endurance Live Celebrity Athlete of the Year in 2013. He was made a member of the New Zealand Order of Merit in 2014 for his services to television and tourism.

Born in New Zealand, Keoghan has experienced a life full of travel and adventure. After surviving a near-death experience at the age of 19, Keoghan wrote a list of things to do before he died and created a Tick-it Before You Kick-it® philosophy, which he turned into a bestselling book, No Opportunity Wasted. He is a regular motivational speaker at colleges and Fortune 500 companies around the world.

Louise Keoghan has been collaborating with her husband for more than two decades. Born in Australia, she is an award-winning producer who has co-created and produced dozens of highly rated primetime entertainment, sports, reality, children’s television, news, specials and natural history programming for broadcasters in the U.S., New Zealand, Australia and Canada, including National Geographic, E!, Amazon, Hulu, Smithsonian, Global, TVNZ, Channel 7, Discovery, Sky and SHOWTIME. Also, she produced and co-wrote the award-winning documentary Le Ride, which was an Official Selection at SXSW and Opening Night and Festival Favorite Film at a number of festivals around the world.

TOUGH AS NAILS comes from Raquel Productions Inc. and Tough House Productions. A premiere date will be announced at a later time. The series will be conducting a nationwide casting search in November. For more information on dates and cities, go to www.toughasnailscbscasting.com.

What do you think? Do you like the sound of the Tough as Nails TV show? Will you check out this new CBS series?

Yes I am waiting.

I’ll absolutely watch it. Love Phil on The Amazing Race. In fact, it’s my favorite show & by the way, when is it coming back?

Yes my wife and I will check it out