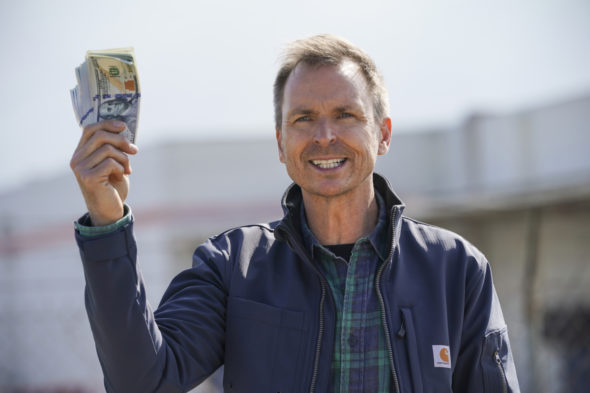 CBS is keeping Phil Keoghan on the payroll. The network has renewed the Tough As Nails TV show for a second season.

The Tough As Nails TV show is hosted by Keoghan, who also produces with Louise Keoghan. The series celebrates everyday Americans who roll up their sleeves and don’t think twice about working long hard hours and getting their hands dirty, in order to keep their country running. In the series, competitors consider the calluses on their hands a badge of honor and are tested for their strength, endurance, life skills and, most importantly, mental toughness in challenges that take place at real-world job sites. At the end of the season, the winning individual contestant will be crowned as the Tough as Nails champion and will win a Ford Super Duty truck and a $200,000 cash prize.

Airing on Wednesday nights, the first season of Tough As Nails currently averages a 0.52 rating in the 18-49 demographic and 2.95 million viewers in the Live+same day ratings. There are four episodes remaining in the 10 installment season.

CBS announced today that its winning reality competition series TOUGH AS NAILS has been renewed for a second season. The series is created by Emmy Award-winning producer Phil Keoghan and his producing partner Louise Keoghan, who are also executive producers. Phil Keoghan is the host.

Since the series premiered on Wednesday, July 8, TOUGH AS NAILS has been the clear winner for its time period in key demos, while averaging a solid 4.23 million viewers throughout its summer run.*

“TOUGH AS NAILS stands out with its unique look and positive, heartfelt competitive spirit that showcases the strength, grit and determination of remarkable hardworking men and women,” said Thom Sherman, Senior Executive Vice President, Programming, CBS Entertainment. “Under Phil Keoghan’s deft touch, the series has lived up to its name as a real summer workhorse for us, and we look forward to a second season with another extraordinary group of competitors.”

TOUGH AS NAILS is a competition series that celebrates everyday Americans who get their workout on the job rather than the gym, wear work boots instead of workout shoes and consider the calluses on their hands a badge of honor. Competitors are tested for their strength, endurance, agility and mental toughness in challenges that take place in the real world. One by one, they are eliminated until the TOUGH AS NAILS winner is named, but nobody goes home. Even after they “punch out” of the individual competition, they have the opportunity to win additional prizes in the team competitions that continue throughout the season. The series redefines what it means to be tough, proving that it comes in all shapes and sizes.

Casting has begun for season two. Those who would like to apply to be a challenger can visit https://www.toughasnailscbscasting.com/home.

Keoghan’s other gig, The Amazing Race, is set to return for its 32nd season sometime this fall.

What do you think? Have you watched the Tough As Nails TV show? Will you be watching season two on CBS?

Great show! We love sitting down after dinner to watch real people with real passion compete for the “tough as nails” title! Can’t wait for Season 2!

Tough as Nails is the best reality TV show I have ever watched. Looking forward to season 2!

Will watch season 2. What date does season 2 begin?