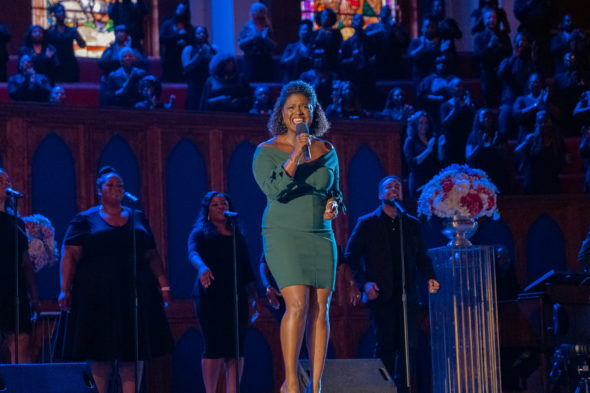 How will this mega-church story end?. Has the Greenleaf TV show been cancelled or renewed for a sixth season on OWN? The television vulture is watching all the latest cancellation and renewal news, so this page is the place to track the status of Greenleaf, season six. Bookmark it, or subscribe for the latest updates. Remember, the television vulture is watching your shows. Are you?

Airing on the OWN cable channel, Greenleaf stars Merle Dandridge, Keith David, Lynn Whitfield, Kim Hawthorne, Lamman Rucker, and Deborah Joy Winans. The story centers on the Greenleaf family and their Memphis megachurch’s congregation. In the final season, the Greenleafs attempt to maintain a united front in the face of losing their church to Bob Whitmore and Harmony and Hope Ministries, but secrets past and present create what could be fatal fractures in the family’s fragile foundation. The Bishop continues working to mend his rift with Lady Mae while, day by day, Harmony and Hope’s grip on Calvary tightens.

The fifth season of Greenleaf averaged a 0.28 rating in the 18-49 demographic and 1.28 million viewers. Compared to season four, that’s up by 28% in the demo and up by 20% in viewership. Find out how Greenleaf stacks up against other OWN TV shows.

We don’t have to wonder if OWN will cancel or renew Greenleaf. It has already been announced that the show ends with season five but, there is a spin-off series in the works. I’ll update this page with breaking developments. Subscribe for free alerts on Greenleaf cancellation or renewal news.

What do you think? Do you think that the Greenleaf TV show should have been renewed for a sixth season?

I would love to see Greenleaf return. It was my guilty pleasure to watch when I would take writing breaks. I don’t watch many series on television but it was truly one I looked forward to!

Gosh, I love Greenleaf please renew it.I love every one of the actors ,Black lives matter

Yes, I think it should be renewed. I absolutely love this series. In my opinion Greenleaf is a reality show, it is showing us exactly what is going on in the church right now. Its really a great show with a great cast.