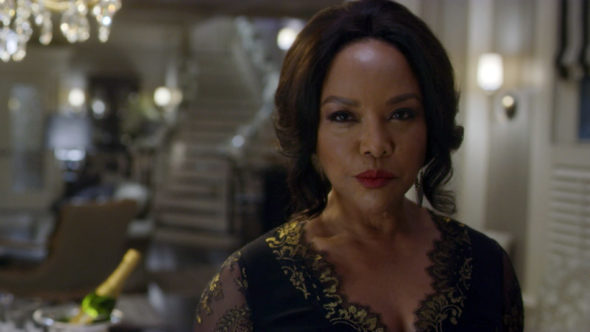 Will the Greenleaf family survive to fight another day? Is the Greenleaf TV show cancelled or renewed for a fifth season on OWN? The television vulture is watching all the latest cancellation and renewal news, so this page is the place to track the status of Greenleaf, season five. Bookmark it, or subscribe for the latest updates. Remember, the television vulture is watching your shows. Are you?   *Status update below.

The fourth season of Greenleaf on OWN averaged a 0.22 rating in the 18-49 demographic and 1.07 million viewers. Compared to season three, that’s down by 19% and 18%, respectively. Learn how Greenleaf stacks up against the other OWN TV shows.

Will OWN cancel or renew Greenleaf for season five? Though the series’ ratings have dropped, Greenleaf is still one of OWN’s most popular shows so I don’t think it’s ending, at least right now. I’ll keep an eye on the Nielsens and update this page with breaking developments. Subscribe for free Greenleaf cancellation and renewal alerts.

What do you think? Are you glad the Greenleaf TV show was renewed for a fifth and final season? How would you feel if OWN cancelled this TV series, instead?

Bring Greenleaf back for more seasons!! We love this show. Thanks for Netflix for bringing this into our living room!!!

Please bring Greenleaf back for 6th season… I love it! Couldn’t get enough of it… thank you!

Please don’t cancel the show. I hate that Bishop had to die, but please write more shows. It’s great drama. I love this show.

Awesome show! Please don’t cancelle the show that is depicting life as it is and not so much sex and vulgar language!

This has been one of the best program broadcast. It made me feel like I was there. The plot seemed realistic, and heartfelt. I wish it wasn’t leaving. Every sermon, every song given made me know they did their homework, whoever wrote those sermons, especially the last sermon by Lady Mae. We need more “clean” programs aired

Ratings mean nothing. Most of us do not watch shows I’m network channels anymore we just wait until it’s on Amazon Hulu or Netflix.

LOL Ratings may not mean anything to you but they are very important to the people who pay to make this show. Income from Amazon, Hulu, and Netflix is secondary to income from commercials.

No I am bitter sad it is the best family drama on black TV.. why don’t you want to keep it Oprah.. they are so many stupid programs that are on TV that is still on..bunch of shifty series..dont take it off.

I am so disappointed that Greenleaf will not be renewed , please reconsider.

This show has inspired me in so many ways. I record each weekly segment. It shows that even Christians experience circumstances within the Church. I love the show and hope it returns after season 5.

Is season 5 going to be shown in the UK soon? I finished season 4 last night, and was very disappointed to read that they not show it in Uk.