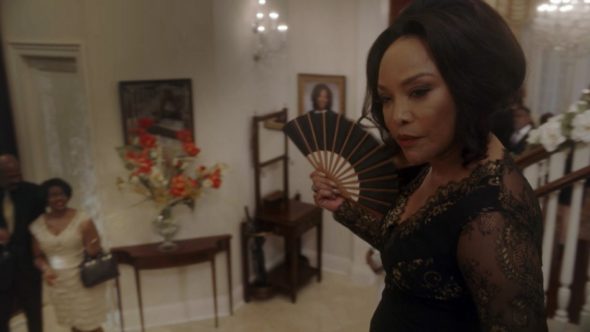 Does the third season of the Greenleaf TV show on OWN lift your spirits? As we all know, the Nielsen ratings typically play a big role in determining whether a TV show like Greenleaf is cancelled or renewed for season four. Unfortunately, most of us do not live in Nielsen households. Because many viewers feel frustration when their viewing habits and opinions aren’t considered, we’d like to offer you the chance to rate all of the Greenleaf season three episodes here.

What do you think? Which season three episodes of the Greenleaf TV series do you rate as wonderful, terrible, or somewhere between? Should OWN cancel or renew Greenleaf for a fourth season? Don’t forget to vote, and share your thoughts, below.

9/19/18 update: OWN has renewed Greenleaf for a fourth season. Details here.

I love the show and I would be sadly disappointed to see it end..Kudos to OWN for granting its continuance..I can’t wait for Season 4 and beyond..

I love Greenleaf. My husband (a minister) and I look forward to watching it every week. This show portrays the human side of church folks and preachers kids as well as overall family drama and today’s issues…especially teens…

Love Greenleaf. So many are addicted to this show including me. If they cancel this show….”I can’t even” as Lady Mae would say. I suspect and expect to see Season 4, 5 and 6 renewed.

I love Greenleaf. It’s great to see an African American cast of this caliber in a drama

I love greenleaf! I hope they don’t cancel the season

I love everything about this show. Hope you do not cancel.

I like Greenleaf but disappointed that they have brought Rick Fox back as a regular. He lacks chemistry with Merle Dandridge one of the main characters and that takes me out of her story. I hope they bring in a new love interest to better compliment her. The other stories are good. Curious about Lady Mae and her secrets.

I have not seen it fully yet.

I live in Canada so I haven’t seen the start of Season 3 yet. Darn!