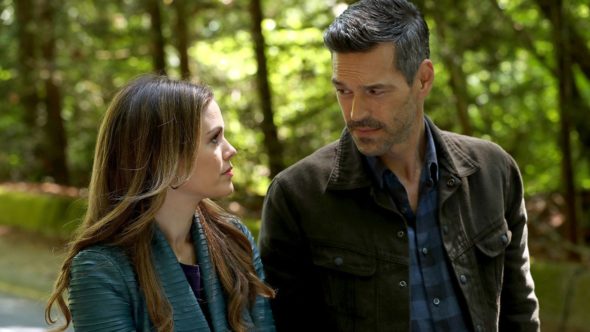 It looks like Take Two may not be getting a season two. According to The Hollywood Reporter, ABC has cancelled the TV show after only one season.

Ratings for Take Two were never particularly high. Season one averaged a .42 rating in the 18-49 demo and 2.707 million viewers.

Although ABC has cancelled Take Two, THR says the production is looking into shopping a second season to another outlet, possibly a streaming service.

What do you think? Have you seen Take Two? Would you watch a second season?

Seriously bring it back! Why do you can always all the good ones. You didn’t even give people a chance to fall in love with these characters. It’s the same as CASTLE. Slow start, great run.
At least make a movie so we know Deacon is busted and Eddie gets out of jail! Seriously I’ll start a petition! Bring it back! Bring it back!! Not fair to judge a show on one quick summer when no one is home watching tv!
Give it a fall shot…bring it back!! It was adorable! The chemistry, the banter! Soooo gooood!

Love love love it. Please Bring it back. I never even knew about it till few days ago. I believe it just needs to be advertised more and streamed. I actually paid for them just looked to see when season 2 was coming out and was so disappointed.

I absolutely loved “Take Two” and I definitely want a season two and three and so on!! Please bring it back!!