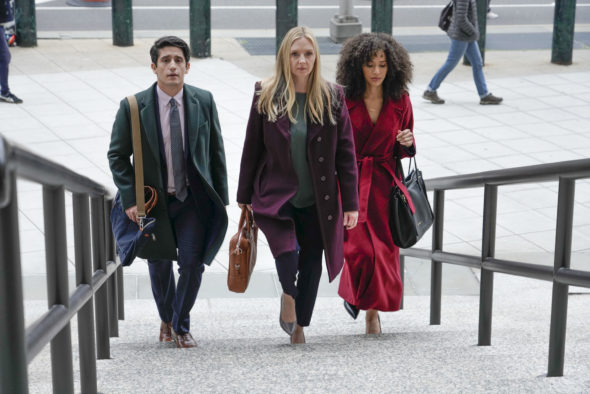 Is the verdict in? Has the For the People TV show been cancelled or renewed for a third season on ABC? The television vulture is watching all the latest cancellation and renewal news, so this page is the place to track the status of For the People, season three. Bookmark it, or subscribe for the latest updates. Remember, the television vulture is watching your shows. Are you?

The second season of For the People averaged a 0.49 rating in the 18-49 demographic and 2.87 million viewers. Compared to season one, that’s down by 22% in the demo and up by 13% in viewership. Find out how For the People stacks up against other ABC TV shows.

Will ABC cancel or renew For the People for season three? I’m surprised it came back for this season, considering that the Alphabet Network cancelled shows which outperformed it. The network needs new dramas and clearly wants to keep a connection to Shondaland with all of its Thursday night shows but, this series doesn’t seem to be working. Viewership is way up but the demo is way down. I think it will be cancelled but this one could go either way. Subscribe for free alerts on For the People cancellation or renewal news.

Please bring back for the people

Why do these networks keep cancelling good shows. Bring this show back

Click this link for a petition to bring back For The People tv show.
Please, let’s make the good dramas stay.

Please, bring back the show

So sad the show was cancelled!!!

The show was an excellent legal show with great characters. Please do not cancel the series. Lots of people love it.

Please click and share this link to show your support for the TV series ‘For The People.

Loved this show. Please bring it back Everyone we know well loves it.

Please click and share this link to show your support for the TV series ‘For The People.

We only just now in 2020 started watching this series
Big shame it has been cancelled and we vote strongly for it to be renewed
Great cast, good stories and social commentary

Law & Order was also canceled after it’s first season. Look what happened to that show.

Loved the show For the People……..hope it returns….good, clean, lawyer show!! Why dont we get to vote on these things!!!!

Very sad the show is cancelled. Unlike a lot of series you could buy into the character early in season one. By the end of season two you could get emotional about the choices they made. The caseload was interesting and could have become more political in a third season. I have seen many worse series from USA that have been renewed for more than two seasons. I hope someone else picks up the option

This is one of the smartest shows I’ve seen for a long time. It is not predictable or boring. It’s intersting with drama and comedy! Please, please reconsider!!! Bring it back!