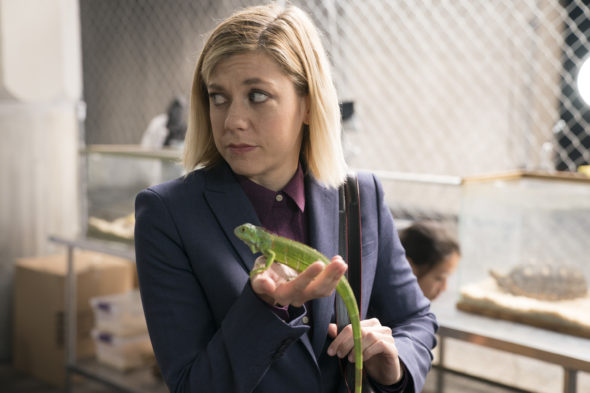 The verdict is in. ABC has renewed its For the People TV show for a second season. Watch the announcement below. The Shondaland TV series comes from creator Paul William Davies — a veteran of the recently ended Scandal. Do not be surprised if there are casting changes and other tweaks made during the hiatus. When a show with ratings this low snags a renewal from the clutches of cancellation, there are almost always changes on the way.

For the People Renewed for Season Two on ABC

Although the network hasn’t yet issues a renewal press release, it announced the renewal on social media. Check it out.

For the People: A Look at the Ratings

The first season of For the People averaged a 0.66 rating in the 18-49 demographic and 2.64 million viewers. Of the 26 scripted ABC TV shows we’re tracking right now, it ranks 21st when sorted by either measure.

All told, today ABC renewed three dramas: For the People (season two); How to Get Away with Murder (season five), and Grey’s spin-off Station 19 (season two).

What do you think? Did you watch the first season of the For the People TV series? Did you expect ABC to cancel or renew it for season two?

Really enjoyed this show. There are a limited number of shows that are clever, well-written and satisfying to watch.

Please continue this show. There are so few smart, well-written shows to watch. Acting is excellent.

I just think this show is AWSOME, great cast, thought full issues. For once ABC has me watching .

For the People ended up being my most favorite TV show of all. I love the interactions between the cast members, the comedy, the story lines, just everything. I am delighted it has been renewed! Kudos!

That sound you heard was millions clicking off of this show because of it’s NY/CAL liberal slant. Don’t mess with Texas since we’re the only state with more minorities than white people. Also, the recent characterization of ICE was a stupid lie. We will watch no more, forever.

I love this show! The cast and story lines are great!!!