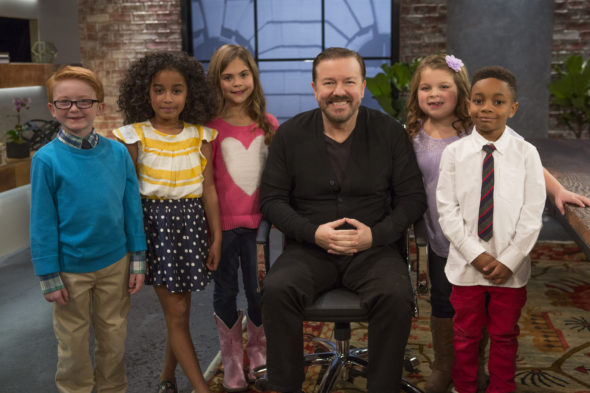 Hosted by Fred Savage and created by Ricky Gervais, the game show asks adult players to try and answer 10 questions correctly for a prize of $200,000. When the grownups give the wrong answer, that’s when five cute and funny kids ride to the rescue.

ABC‘s renewal of Child Support is surprising given its poor ratings. Over six episodes, season one averaged a .72 rating in the 18-49 demo and 3.742 million viewers, making it on one of the network’s lowest-rated unscripted series for the 2017-2018 season.

CHILD SUPPORT
“Child Support” is a one-hour studio-based series from Golden Globe® and Emmy® Award-Winning Ricky Gervais and Banijay Studios North America. The series features adult contestants and priceless interactions between funnyman Ricky Gervais and a group of five kids who say the most unpredictable things.

Hosted by Fred Savage, contestants are asked to answer 10 questions correctly to earn the top prize.  If they answer incorrectly, the contestants have a chance to be saved by the five kids who have been asked the same question by Gervais.

What do you think? Have you seen Child Support? Will you watch season two?

I loved Child Support. Looking forward to another season

This show is so much fun!! I love the kids and their interaction with Gervais!! More Bowtie please!!

With all the trash shows that are now on tv, Child Support is such a breath of fresh air. I do not know who makes these renewal decisions, but I hope they are people who want to see decent, family-oriented shows return to television. There so do few shows on television in Prome Time that one cal allow their children to watch. This show is one that should be renewed!

Excellent and very entertaining program that we look forward to. Would be a big mistake to cancel this one. Fred, Ricky and the kids do a fantastic job and I for one, would love to see it televised more than once per week. And what’s with the low ratings? Who are you asking? Come on ABC, get real.

I absolutely love the show its educating, funny and so refreshing from a lot of garbage that is on tv today and yes I will watch it and tell all my friends to watch it also

ABC would be making one big mistake to cancel a 2019 version of child support. The child support I am referring to is the game Xiao. We need to have game Shaw’s back on television once again. I grew up watching game shows. They were educational. Bringing back The game shows such as child-support, match game, the pyramid, and perhaps even now you see it or Hollywood’s talking would bring us back to what life is really about. Today TV seems to portray too much violence and hatred towards our president. Perhaps bringing more family friendly television shop Back to… Read more »

We love this show! You never know what the kids will come up with. Ricky Gervais is GREAT with the kids. It seems like a 15 minute program. It is funny, surprising, and the questions are challenging. Fred Savage is a great host.

I watch this show with my Mother, we laugh and play along it’s a wonderful program! If the ratings are low perhaps it’s the televised night? A lot of families invloved with their children’s sport activities are on Friday night, people go out to relax from working all week. I hope if ratings stay low they would put it on Sunday night family television when it can be watched together before considering a cancelation.

Love this show!!!! These kids are so cute and smart!

I love the show Child Support. It’s fun, upbeat and, with cute kids and great contestants, how can one not like it. It’s also something that can be enjoyed by the whole family.