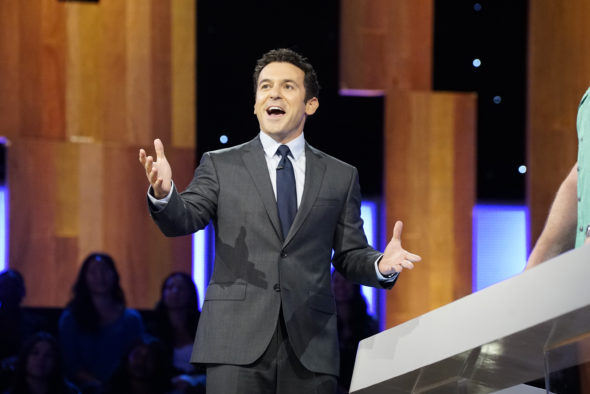 Who’s kidding who? Has the Child Support TV show been cancelled or renewed for a third season on ABC. The television vulture is watching all the latest cancellation and renewal news, so this page is the place to track the status of Child Support, season three. Bookmark it, or subscribe for the latest updates. Remember, the television vulture is watching your shows. Are you?

An ABC game show, Child Support was created by Ricky Gervais. Fred Savage hosts the series, in which adult players have to answer ten questions correctly, in order to win the top prize of $200,000. When the grownups give the wrong answer, that’s when five cute and funny kids ride to the rescue. Gervais has asked the children the same thing. If they are able to supply the correct response, their support saves the adults.

The second season of Child Support averaged a 0.43 rating in the 18-49 demographic and 2.23 million viewers. Compared to season one, that’s down by 42% and 40%, respectively Find out how Child Support stacks up against other ABC TV shows.

Will ABC cancel or renew Child Support for season three? The ratings were low last year and they are truly terrible in season two. I don’t think ABC will renew it for a third season. I’ll update this page with breaking developments. Subscribe for free alerts on Child Support cancellation or renewal news.

Update: ABC has cancelled the Child Support TV show so there won’t be a third season.

What do you think? Were you hoping that the Child Support TV show would be renewed for season three? Are you sorry that ABC cancelled this TV series, instead?

I really loved watching that show child support I marked my calendar every time it was supposed to come on that week I am very disappoint that it’s not coming back on tv what a waste my favorite show my family loved that show too. Please renew it it was soo funny.

This is the best show ever I just love this show ,please please consider renewing this show it’s so funny & Ricky is so funny with the kids he is the best , please bring it back we need shows like this with laughter the way the world is today more laughter!!!

You This was the best show ever so funny & Ricky was so good and funny with the kids, please please consider bringing this show back it is so good , we need laughter in this world today!!

I love child support, I watched it every week, please don’t cancel it.

I love this game show, and especially the host, Fred Savage. He is extremely talented, and enjoyable to watch. Please renew.