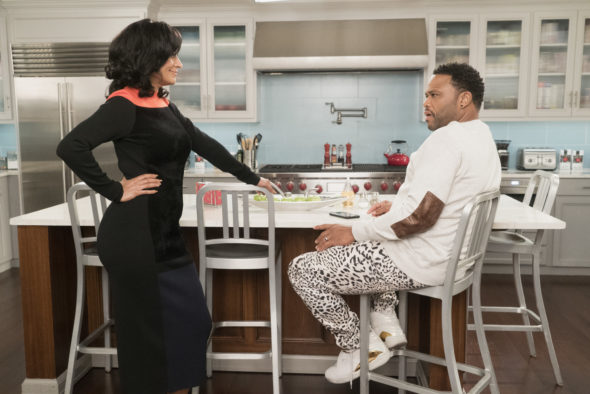 The Alphabet Network is sticking with the Johnsons (even if the Johnsons don’t stay together). ABC has renewed its Black-ish TV show for a fifth season. While the comedy has fallen some in the Nielsen ratings, it still draws a decent audience, and the spin-off, Grown-ish, is doing well for sister network Freeform.

An ABC sitcom, Black-ish stars Anthony Anderson, Tracee Ellis Ross, Yara Shahidi, Marcus Scribner, Miles Brown, Marsai Martin, Peter Mackenzie, Jeff Meacham, Jenifer Lewis, Deon Cole, and Laurence Fishburne. Dre (Anderson) and Rainbow (Ross) Johnson want to give their children the best, including a strong sense of cultural identity and respect for the past. In the fourth season, with DeVante home, the whole family is adapting to the realities of having a new baby at home.

Black-ish: A Look at the Ratings

The fourth season of Black-ish is averaging a 1.19 rating in the 18-49 demographic and 4.24 million viewers. Compared to season three, that’s down by 21% and down by 18%, respectively. It currently ranks about in the middle of the ABC TV shows we’re tracking.

With nearly 100 episodes already in the can (including one that ABC shelved), the series already has enough episodes for syndication.

What do you think? Are you still a fan of the Black-ish TV series? Did you think it would be cancelled or renewed for season five on ABC?

Do not (I repeat) do not divorce Dre and Rainbow. I’m not having it! LOL…
But seriously, don’t divorce them. That would be tragic and bring down the comedy level.

Please come back to the oroginal fun / political items. The drama in the end of last season, splitting up, simply takes the show off track. To the point, we no longer want to watch the show… it’s sad… what use to be one of favorite shows is now avoided to stop this negativity in our house. We love you… so please bring back the original fun loving political messages and family interactions of Black-ish.

The show show be renewed but get back to the original theme of the show. They shouldn’t have canned the episode that was relevant to today’s issues. I don’t want to see a watered down tight rope walking show. Be bold, the way you started out. P.S. Get the old writer back!!

It could be cancelled, now that they are breaking up ? I won;t watch them if not a family. It will be stupid.