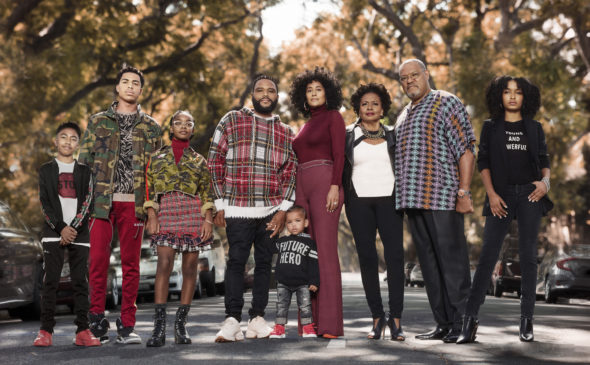 In the fifth season of ABC’s Black-ish TV show, are you still enjoying visiting the Johnsons? As we all know, the Nielsen ratings typically play a big role in determining whether a TV show like Black-ish is cancelled or renewed for season six. Unfortunately, most of us do not live in Nielsen households. Because many viewers feel frustration when their viewing habits and opinions aren’t considered, we’d like to offer you the chance to rate all the Black-ish season five episodes here.  *Status update below.

An ABC sitcom, Black-ish stars Anthony Anderson, Tracee Ellis Ross, Yara Shahidi, Marcus Scribner, Miles Brown, Marsai Martin, Peter Mackenzie, Jenifer Lewis, Deon Cole, and Laurence Fishburne. Dre (Anderson) and Rainbow (Ross) Johnson want to give their children the best, and they’re determined that best will include a strong sense of cultural identity and respect for the past, as their foundation for a bright future. Season five kicks off with the Johnsons dropping Junior (Scribner) off at college, but they soon learn he has other ideas.

What do you think? Which season five episodes of the Black-ish TV series do you rate as wonderful, terrible, or somewhere in the middle, that’s neither black nor white? Should ABC cancel or renew Black-ish for a sixth season? Don’t forget to vote, and share your thoughts, below.

Arnold, Cedric and the rest of the cast is funny. The relationships displayed is real life and everyone on the show proves it. Great show give it a chance.

I love this show sooo much!! It’s sooo funny but teaches so many lessons at the same time. Please please pleaseee renew this!!!!

Best show ever since Will Smith’s fresh Prince of Bel air,no lie at first i did not like the show black-ish but unlike something’s WOW & DAMN (time)my generation maybe you’rs has this tv show changed so many ‘s n minds…..this is MY nu life lessons!!!?! learn and watch ppl!!! how to treat people’s rrr person’s. Life riht……

I wished they didn’t take off Rainbows dad (they had him pass away) it was fun to have a white hippie smart guy I am white and thought it made for fun episodes. And the fact that the grandparents were all so different. The guys in the office are funny but it’s just not the same as your own crazy mixed up family ! I’m also sad they took Zoey off wish they would bring her back from college. Great cast selections on this show