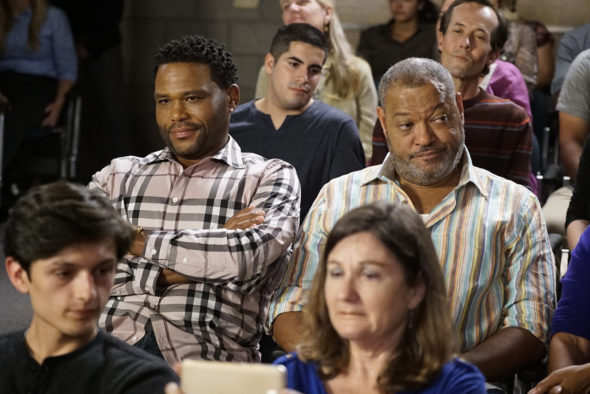 Do Dre and Rainbow Johnson keep it real for their kids in the fourth season of the Black-ish TV show on ABC? As we all know, the Nielsen ratings typically play a big role in determining whether a TV show like Black-ish is cancelled or renewed for season five. Unfortunately, most of us do not live in Nielsen households. Because many viewers feel frustration when their viewing habits and opinions aren’t considered, we’d like to offer you the chance to rate all the Black-ish season four episodes here.

An ABC sitcom, Black-ish stars Anthony Anderson, Tracee Ellis Ross, Yara Shahidi, Marcus Scribner, Miles Brown, Marsai Martin, Peter Mackenzie, Jeff Meacham, Jenifer Lewis, Deon Cole, and Laurence Fishburne. Dre (Anderson) and Rainbow (Ross) Johnson want to give their children the best, and they’re determined that best will include a strong sense of cultural identity and respect for the past, as their foundation for a bright future. In the fourth season, with DeVante home, the whole Johnson family needs to adapt to the realities of having a new baby under their roof.

What do you think? Which season four episodes of the Black-ish TV series do you rate as wonderful, terrible, or somewhere in the middle, that’s not so black and white? Should ABC cancel or renew Black-ish for a fifth season? Don’t forget to vote, and share your thoughts, below.

please don’t end this show. Most of the shows I watch are gone and replaced with shows I don’t like, the good doctor, Kevin saved the world just t0o name a few.
I really don’t want to watch tv anymore

Please renew Blackish. I love this show!!! It’s like a modern day version of The Cosby Show but more relatable to a down to earth well off African American family. But please fix it where Bow and Dre will work out their issues. I would even like to see Jennifer Lewis and Laurence Fishbourne’s characters get back together.

I LOVE BLACKISH ANTHONY ANDERSON IS HILARIOUS AND TERRI ROSS IS BEAUTIFUL AND SEXY AS HELL I’M REALLY LOOKING FORWARD TO ANOTHER SEASON.

This is a great show (blackish). I hope it is renewed for the fifth season. Blackish d eals with real issue. Most sitcoms don’t scratch the surface of everyday issues. In addition, I hope the fifth season that Dre and Bo reconcile there differences. I love this show…this show helps to explain a lot of social and family relationship issues.

I cant say its funny at all. It needs a better writer its boring me….