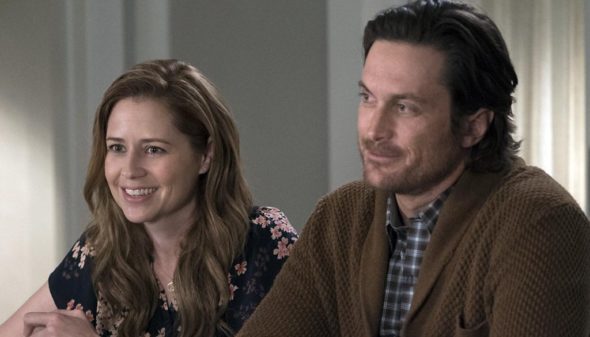 The alphabet network doesn’t want to break up with Splitting Up Together. ABC has renewed the newbie sitcom for season two. It is the only freshman comedy on the network this season to survive to see a second season.

Splitting Up Together stars Jenna Fischer, Oliver Hudson, Bobby Lee, Diane Farr, Lindsay Price, Olivia Keville, Van Crosby, Sander Thomas, and Kelsey Asbille. The family sitcom centers on a married couple, Lena (Fischer) and Martin (Hudson), who have lost that lovin’ feeling. Having arrived at the conclusion that everyone would be happier if they divorced, Lena and Martin decide to split, but to minimize the impact on their three kids, they’re “bird nesting.” The parent who is on-duty in a given week lives in the house, with the children, while the other decamps to the garage. Once they’re apart, they begin to see their own failures and the other’s contributions. Splitting up together, like this, just might reignite their love.

The first season of Splitting Up Together is averaging a 1.31 rating in the 18-49 demographic and 4.48 million viewers. It’s currently ABC’s seventh-highest-rated show in the demo and number nine when it comes to total viewers. The high rankings are in-part due to its debut airing out of the highly-rated season premiere of the Roseanne revival.

What do you think? Do you like the Splitting Up Together TV show? Are you glad that it’s been renewed for a second season?

I just love this show please keep it going. There aren’t many shows a family can watch together anymore this is a funny, family show. Good job guys.

I love this show too but am sad to see it will come on at the same time as This Is Us in the Fall. PLEASE don’t do that. I HAVE to watch This Is Us and don’t have a dvr or any way to record another show. Can’t you have it come on at 8:00 or 8:30????? Please reconsider!!!

Could always get Hulu! That’s how I keep up with all my shows when it’s convenient for me to watch them

I love this show my boyfriend and I watch it every Tuesday at 930 pm. I do however wish it would come on earlier in the evening but I really hope to see more seasons

Great show, glad to see it has been renewed. Make sure you bring back Trent Garrett too, he’s a hottie <3

This is my favorite show! I am glad it is being continued.

Absolutely love this show! It had me laughing out loud through every episode! Love all the characters witty personalities! Love love love bring on season 2 already

I love this show!!! Love the characters and the casting. Helped me take a look at my own marital shortcomings.

Too many good shows disappear. A lame box a select few indicates 1 thing, archaic polling methods. It’s 2018, not 1978. Try utilizing social media and not something that became useless in the 2000s. Hire the right people to do the research too, not social media “experts”, “professionals” or addicts. Hire real R&D professionals, etc.. it’s easy to explain how/who…

I love this show! Glad it was renewed for Season 2!

My wife and I love the show. Both stars are effective, believable and humorous. The story line is unusual without being ridiculous and the pace is nice. One big plus is that it doesn’t try to cram several sub stories into a half hour. Overall, I think TV stinks, but I look forward to Splitting Up Together.

Really? Kevin (probably) saves the world canceled, and this was renewed? Could not make it past the second episode of this one

Really, I liked Kevin (probably) saves the world but slitting up together is a lot better.

A rather enjoyable show with likeable characters.