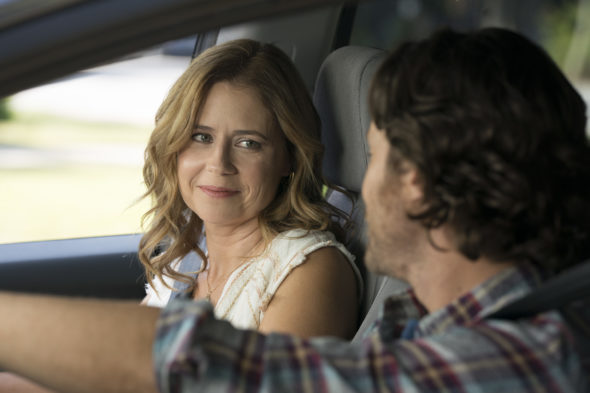 An ABC sitcom, Splitting Up Together stars Jenna Fischer, Oliver Hudson, Bobby Lee, Diane Farr, Lindsay Price, Olivia Keville, Van Crosby, and Sander Thomas. The comedy centers on a married couple, Lena (Fischer) and Martin (Hudson), who have concluded everyone would be happier if they divorced. To minimize the impact on their three kids, they’re “bird nesting.” The parent who is on-duty in a given week lives in the house, with the children, while the other decamps to the garage. Season two kicks off right after their hookup in the season one finale, with Lena and Martin imagining how reuniting could play out.

**Status Update 5/10/2019: Splitting Up Together has been cancelled by ABC; there will be no season three. Details here.

I love this show. I’m a single mom of 4 kids and don’t have much “mom” time. When I can sneak an hour I check to see if any new episodes are out and get excited if there are. My weekends without the kids is when I usually watch this show. It’s relatable in many areas. And honestly….it makes me want to have a better relationship with my ex where it is more respectable and appreciated rather then angry and hateful. I can’t speak for every women but I love the fact that the writer has made Martins character realize… Read more »

I love the show Splitting up Together. Keep it up ABC

I felt it could be a great promise from the beginning. BAD casting almost kept me from watching at all. The finale was the worst senerio I could IMAGINE ANY couple “agreeing to”! Also the script was ALL OVER the place! Even trying to “ google up” the “past” and starting a “ new future” with father and son was horrible. Good luck. You lost my vote.