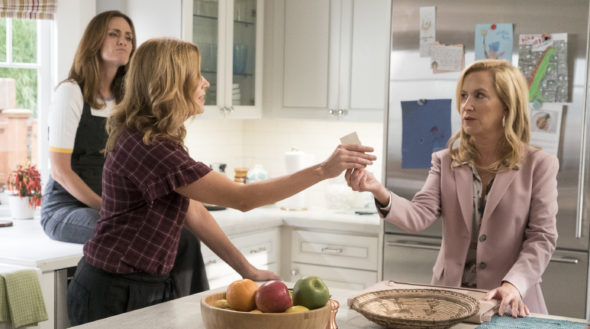 Are Lena and Martin sticking it out? Has the Splitting Up Together TV show been cancelled or renewed for a third season on ABC? The television vulture is watching all the latest cancellation and renewal news, so this page is the place to track the status of Splitting Up Together, season three. Bookmark it, or subscribe for the latest updates. Remember, the television vulture is watching your shows. Are you?

An ABC comedy, Splitting Up Together stars Jenna Fischer, Oliver Hudson, Bobby Lee, Diane Farr, Lindsay Price, Olivia Keville, Van Crosby, and Sander Thomas. The comedy centers on a married couple, Lena (Fischer) and Martin (Hudson), who have concluded everyone would be happier if they divorced. To minimize the impact on their three kids, they’re “bird nesting.” The parent who is on-duty in a given week lives in the house, with the children, while the other decamps to the garage. Season two kicks off right after their hookup in the season one finale, with Lena and Martin imagining how reuniting could play out.

Will ABC cancel or renew Splitting Up Together for season three? The ratings are way down and that isn’t good. The network ordered just five more episodes for season two so the series has a bit more time to prove itself. I think it will be cancelled. I’ll keep an eye on the Nielsens and update this page with breaking developments. Subscribe for free alerts on Splitting Up Together cancellation or renewal news.

Status Update 5/10/2019: Splitting Up Together has been cancelled by ABC; there will be no season three. Details here.

What do you think? Should the Splitting Up Together TV show have been renewed for season three? How do you feel, since ABC cancelled this TV series, instead?

My 9 year old daughter and I LOVE LOVE LOVE this show! Its hilarious and I’ve actually seen this situation happen b4 so it makes it even funnier. But I cant believe its canceled! BRING IT BACK PLEASE !!!!!

Show is great.. it should be picked up n renewed

Splitting Up Together is an amazing funny show. Well written and acting is awesome. Good, fun entertainment. Why would ABC cancel a good show??

I am really upset about Splitting Up Together has been canceled. I looked forward to this show every week. I think ABC has made a HUGE mistake.

This show is nice because it The characters are more mature than other shows like the Goldbergs. I can’t believe that was renewed over Splitting Up Together! I love splitting up together because it’s refreshing and optimistic that Lena and Martin will get back together. I don’t like that Lisa Apple storyline as the other people down but this was a great show and all the only one I look forward to watching. Please bring it back!!!

Please renew the show “Splitting Up Together”! It’s a great show with wonderful characters! There is still so much more story to tell with these characters!!!!

Splitting up together is my favorite show. I would be very dissappointed if it was canceled. Please keep it on.

This is a great show! Love the characters and the dynamic.
ABC don’t make the same mistake you made with Last Man Standing…….

Love this show. Get Bobbie Lee more involved and all the characters. Ut’s nice to see a good show without all the sex and perversion. Get Bobbie his own show. He is wonderful.

Love the show! Keep it on!