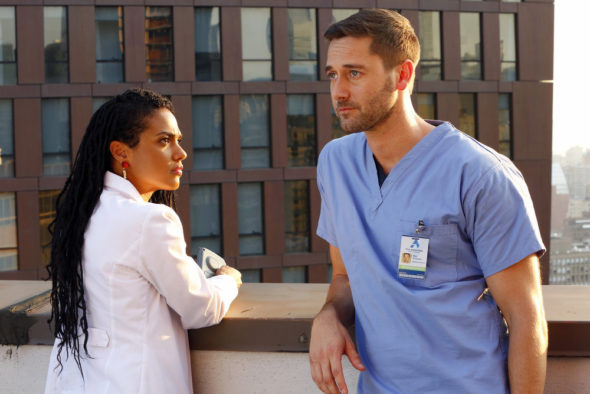 Is there room for another medical drama in primetime? Has the New Amsterdam TV show been cancelled or renewed for a second season on NBC? The television vulture is watching all the latest cancellation and renewal news, so this page is the place to track the status of New Amsterdam season two. Bookmark it, or subscribe for the latest updates. Remember, the television vulture is watching your shows. Are you?

Airing on the NBC television network, New Amsterdam stars Ryan Eggold, Freema Agyeman, Janet Montgomery, Jocko Sims, Anupam Kher, and Tyler Labine. Doctor Max Goodwin (Eggold) is a caring and charming physician whose goal is to fix a broken medical system and to provide exceptional care to the people who need it most. He inspires (almost) everyone around him, and will stop at nothing to breathe new life into the understaffed, underfunded and underappreciated New Amsterdam hospital.

The first season of New Amsterdam averaged a 1.07 rating in the 18-49 demographic and 5.92 million viewers. Find out how New Amsterdam stacks up against other NBC TV shows.

Will NBC cancel or renew New Amsterdam for season two? The ratings are still pretty strong (compared to other network shows) so this series looks safe for now, particularly since the network ordered a full season of 22 episodes. I’ll keep a hungry on the ratings and update this page with breaking developments. Subscribe for New Amsterdam cancellation or renewal alerts.

What do you think? Are you glad that the New Amsterdam has been renewed for a second season? How would you feel if NBC had cancelled this TV show, instead?

I find New Amsterdam a refreshing show filled with truly caring physicians! It is my favorite show!

Please bring it back I’ve recorded from day one and watched the last 11/19/19 a few weeks ago…bring it back it’s a great show with heart. I’ll be watching and waiting with fingers crossed. Powers that be please bring it back. This is the very first time I’ve ever asked to bring a show back and I’m now 63yrs old augh!!!

Yes I love this show! I wish they would have renewed The Village