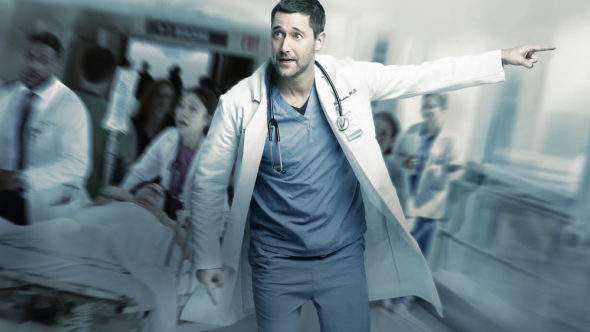 FOX launched a TV show called New Amsterdam back in 2008 and it was cancelled after one season. Now, NBC is trying a new series with the same title but a very different premise. Will this New Amsterdam series survive longer than the last one? Will it be cancelled or renewed for season two? Stay tuned. *Status update below.

What do you think? Do you like the New Amsterdam TV series? Do you think it should be cancelled or renewed for season two on NBC?

New AMSTERDAM is the best show!!!

I’m SOOOOOOO HAPPY New Amsterdam is being renewed for a second season. I absolutely LOVE this show. I love Max Goodwin!!!!

Please DO NOT cancel “New Amsterdam”. Our entire family loves this show. Dr. Goodwin shows such compassion for the patients and the staff and the characters on the show are excellent in their roles. Please keep it on schedule for Tuesday evenings. It’s a great show.

I love this show. The characters are genuine and show compassion for the complex medical problems they encounter.

I am very disappointed in how you portray cancer. Why does dr Goodwin never lose any hair when all cancer patients lose theirs. Make the show more realistic

You must not have watched the last episode … He was LITERALLY pulling clumps of hair out of his head.

Max has been wearing a knit hat for the last 2-3 shows.

I have had cancer and did not lose my hair. Niether did my friend Sheila.

When my mom had breast cancer and had Chemo, she never lost her hair.

There is so much garbage on TV today that it is fantastic to see such a good show — the actors all are great in their roles, Ryan Eggold is so, SO good (and he was so evil-good in The Blacklist!!) as a principled, humane person AND doctor. He brings off each week’s script in a believable manner. This show is strong and I hope it lasts a very long time. Grey’s Anatomy should have disappeared seasons ago, and I was its biggest fan initially. The writing was inspired, but not anymore. It has been a welcome change to have… Read more »

It started out okay but became more and more too far fetched. A medial director on chemo who does every job possible? The snowstorm episodes were the worse! What medical director knows the name of the maintenance guy? Really? And the psychiatrist has all these other duties too. It is not like that in the real world. I work in the medial profession. Nothing like this at all. Not even close. I can understand it being entertaining, but this is too much. These doctors are all over the place doing jobs they would never do. It’s just too unrealistic and… Read more »

Dear Rob…IT’S A TV SHOW!! And, it is engrossing and entertaining at the highest level!!!