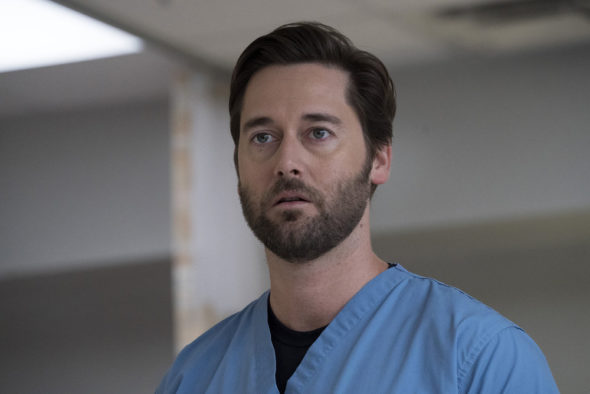 Does Max have more than he can handle in the second season of the New Amsterdam TV show on NBC? As we all know, the Nielsen ratings typically play a big role in determining whether a TV show like New Amsterdam is cancelled or renewed for season three. Unfortunately, most of us do not live in Nielsen households. Because many viewers feel frustration when their viewing habits and opinions aren’t considered, we invite you to rate all of the season two episodes of New Amsterdam for us here. *Status update below.

An NBC medical drama series, New Amsterdam stars Ryan Eggold, Freema Agyeman, Janet Montgomery, Jocko Sims, Anupam Kher, and Tyler Labine. Doctor Max Goodwin (Eggold) is a caring physician whose goal is to fix a broken medical system and to provide exceptional care to the people who need it most. He inspires (almost) everyone around him, and will stop at nothing to breathe new life into the understaffed, underfunded and underappreciated New Amsterdam Medical Center. Those working with Max include Dr. Lauren Bloom (Montgomery), the head of the ER; oncologist Dr. Helen Sharpe (Agyeman); cardiovascular surgeon Dr. Floyd Reynolds (Sims); psychiatrist Dr. Iggy Frome (Labine); and Dr. Vijay Kapoor (Kher), head of the Neurological Department.

What do you think? Which season two episodes of the New Amsterdam TV series do you rate as wonderful, terrible, or somewhere between? Should NBC cancel or renew New Amsterdam for a third season? Don’t forget to vote, and share your thoughts, below.

*1/11/20 update: NBC has renewed New Amsterdam for three additional years — seasons three, four, and five — which will take it through the 2022-23 television season.

please don’t cancel this show I love this show

Great show, keep it in the air!

So happy New Amsterdam has been renewed! Hands Down best drama on TV! Fabulous cast, great storylines! I was hooked from Episode 1.

I love this show please renew it so I can continue watching it.

Amazing opening of the episode with one continuous shot over many minutes. It’s good to see shows experiment with their formats.

Finally you renew one of the great shows. Wish we had more like these.Thank You SO, SO MUCH

Love this show so thanks so much for renewing. I am so happy and excited.