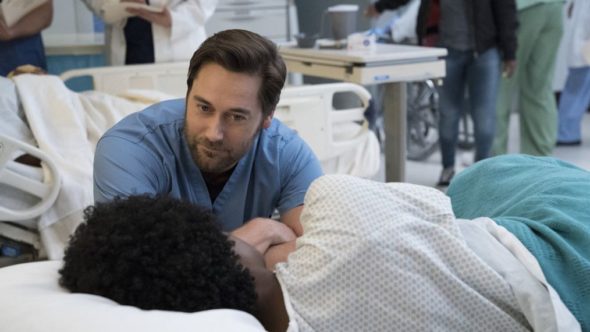 The medical drama stars Ryan Eggold as Dr. Max Goodwin, a caring physician whose goal is to fix a broken medical system and to provide exceptional care to the people who need it most. The cast also includes Freema Agyeman, Janet Montgomery, Jocko Sims, Anupam Kher, and Tyler Labine.

At this year’s winter TCA press conference, NBC revealed they’ve renewed New Amsterdam for seasons three, four, and five. The show, which is currently in its second season, is still performing well in the ratings. So far, season two is averaging a .81 rating in the 18-49 demo and 5.244 million viewers.

You can see the announcement and read more info below:

Third time, no harm. #NewAmsterdam has been renewed for 3 more seasons! pic.twitter.com/UsUcrD4osy

NBC’s hit drama series “New Amsterdam” has been renewed for three years, through the 2022-23 season.

So far this season “New Amsterdam” is averaging a 1.7 rating in adults 18-49 and 9.8 million viewers overall in “live plus seven day” Nielsens, to dominate the Tuesday 10-11 p.m. demo race. Compared with its next-day “live plus same day” results, “New Amsterdam is adding 4.6 million viewers in L+7, for the third biggest lift on television and second biggest for an NBC series.

What do you think? Do you watch New Amsterdam? Are you glad it’s sticking around?

Watch it all TD time . When will season 5 start ?

My boyfriend and I watch it every week. We love the show and am glad to hear it is continuing