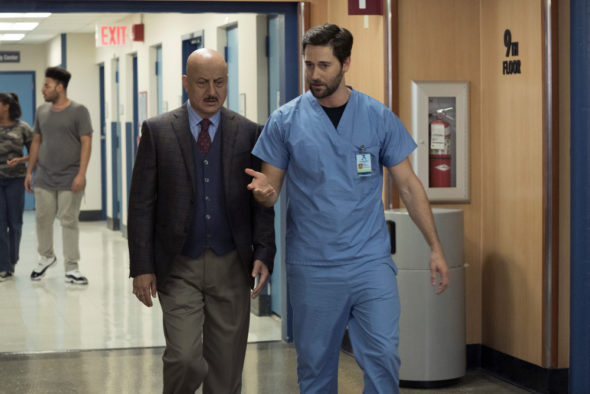 Can Max both survive and succeed? Has the New Amsterdam TV show been cancelled or renewed for a third season on NBC? The television vulture is watching all the latest cancellation and renewal news, so this page is the place to track the status of New Amsterdam season three. Bookmark it, or subscribe for the latest updates. Remember, the television vulture is watching your shows. Are you?    *Status update below.

Airing on the NBC television network, New Amsterdam stars Ryan Eggold, Freema Agyeman, Janet Montgomery, Jocko Sims, Anupam Kher, and Tyler Labine. Doctor Max Goodwin (Eggold) is a caring physician whose goal is to fix a broken medical system and to provide exceptional care to the people who need it most. He inspires (almost) everyone around him, and will stop at nothing to breathe new life into the understaffed, underfunded and underappreciated New Amsterdam Medical Center. Those working with Goodwin include Dr. Lauren Bloom (Montgomery), the head of the ER; oncologist Dr. Helen Sharpe (Agyeman); cardiovascular surgeon Dr. Floyd Reynolds (Sims); psychiatrist Dr. Iggy Frome (Labine); and Dr. Vijay Kapoor (Kher), head of the Neurological Department.

The second season of New Amsterdam averaged a 0.77 rating in the 18-49 demographic and 5.09 million viewers. Compared to season one, that’s down by 28% in the demo and down by 14% in viewership. Find out how New Amsterdam stacks up against other NBC TV shows.

Will NBC cancel or renew New Amsterdam for season three? Considering that the series follows NBC’s biggest shows, the ratings should be better. However, I think they are still good enough to nab New Amsterdam a third season renewal. I’ll keep a hungry eye on the ratings and update this page with breaking developments. Subscribe for New Amsterdam cancellation or renewal alerts.

1/11/20 update: NBC has renewed New Amsterdam for three additional years — seasons three, four, and five — which will take it through the 2022-23 television season.

What do you think? Are you glad that New Amsterdam has been renewed for a third season? How would you feel if NBC had cancelled this TV show, instead?

I love this series with interesting characters and refreshing theme. I am very happy it has been renewed.

This show has deteriotated so much in 2021. I sincerely hope it is cancelled. I know I will not be back. As a registered nurse this is a mockery of modern medicine and tbe head character Max, now looks like a total idiot. No hospital board would allow this type of behaviour.