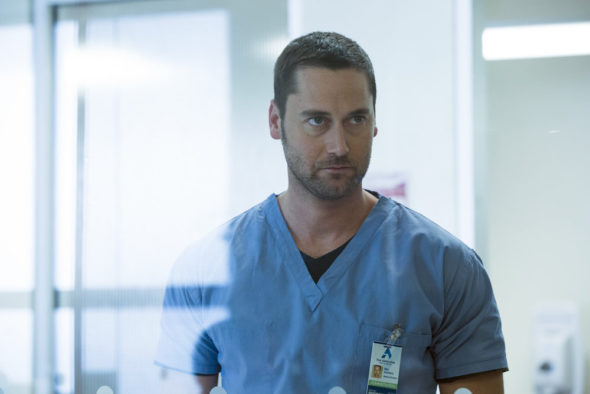 Can Doctor Goodwin change the medical system — and get people to watch the NBC series? As we all know, the Nielsen ratings typically play a big role in determining whether a TV show like New Amsterdam is cancelled or renewed for season two. Unfortunately, most of us do not live in Nielsen households. Because many viewers feel frustrated that their viewing habits and opinions aren’t considered, we’d like to offer you the chance to rate all the season one episodes of New Amsterdam. *Status update below.

What do you think? Which season one episodes of New Amsterdam TV series do you rate as wonderful, terrible, or somewhere between? Should NBC cancel or renew New Amsterdam for a second season? Don’t forget to vote, and share your thoughts, below.

One of my all time favorites. I can’t wait to find out what happened with the accident, I hope everyone is coming back.

I. Love the show Max and Helen are End game chemistry is off the chain Helen you and Bloom have to be alive Max will not make it thru his cancer if anything happens btw these 3 women in his life Georgia Sharpe & Bloom he is going to be a changed man alright can’t wait for season 2

Sanctuary was the pivotal episode since that was when the fortune teller predicted the beginning of the Max/Helen romance. Max’s wife was not mentioned after that until the last episode in which she gave birth and was then involved in the ambulance accident. It seems most Sharpwin fans want her to be the one who was killed so that the Max/Helen love affair can flourish in season 2. Seems like the most plausible and predictable outcome. I don’t care either way as my favorite characters are Reynolds, Iggi and Kapoor.

So sweet that the writers have decided to make Max and Helen a couple. Two 40 yr old docs are finding love the 2nd time around. And now that Max’s wife was killed in the finale, they’ll have Luna to raise together as a family.

Cannot narrow down to an episode; best series airing todate. The “finale” is the best I have seen in years! Remember who shot JR? This is so much better!

This is a great show. Makes me smile and cry. Can’t wait til the new season starts. WooHoo

This is not the kind of show I normally watch. I came on as a Blacklist fan. The show is touching and emotional. It has a heart and as Max is experiencing something we all think will never happen to us, he wants to change the world, especially the medical field in the greatest country in the world. If you have a problem with everyone having access to medical care, the show isn’t for you. This is a true story of one Doctor’s brave fight with a corrupt system. If you don’t watch the show, you shouldn’t be leaving a… Read more »

I love this show!!! Yes, followed the actor from the Blacklist!!!