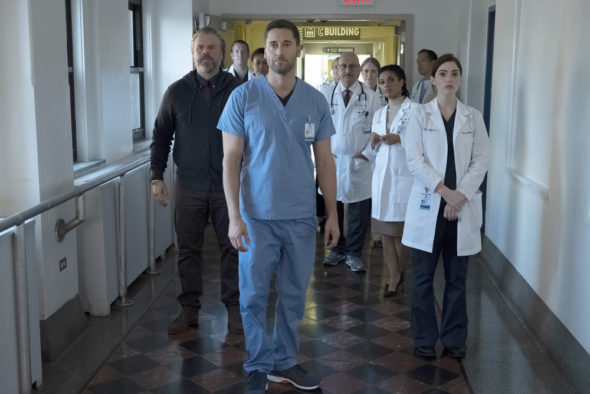 Just what the doctor ordered. The Peacock Network has issued its first full-season pickup for a new drama. NBC has expanded its season one order for its New Amsterdam TV show to 22 episodes. The series premiered on September 25, 2018, and episode three just aired last night, but so far, it has made a strong showing in the Nielsen ratings.

An NBC medical drama, New Amsterdam stars Ryan Eggold, Freema Agyeman, Janet Montgomery, Jocko Sims, Anupam Kher, and Tyler Labine. It centers on Doctor Max Goodwin (Eggold), a caring and charming physician whose goal is to fix a broken medical system and to provide exceptional care to the people who need it most. He inspires (almost) everyone around him, and will stop at nothing to breathe new life into the understaffed, under-funded and under-appreciated New Amsterdam Hospital.

New Amsterdam: A Look at the Ratings

The first season of New Amsterdam is averaging a 1.65 rating in the 18-49 demographic and 7.92 million viewers. Find out how New Amsterdam stacks up against other NBC TV shows.

What do you think? Are you a fan of the New Amsterdam TV series? If you haven’t yet checked it out, does this full season order make you more likely to do so? Let us know, below?

Another great program. They just keep rolling them out and I just love it. helps me to stay calm in an event if something ever happens to my loved ones. Keep it coming.

RENEW RENEW RENEW!!! One of THE BEST medical shows since ER!!!