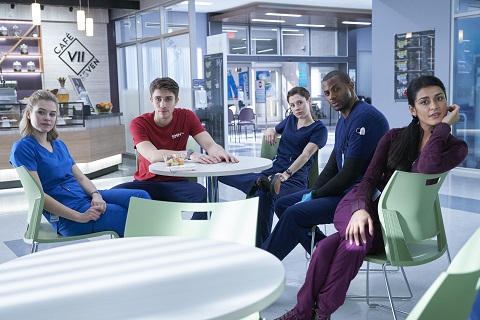 NBC has ordered another Canadian medical drama — Nurses. Viewers will be able to preview Nurses next month before it arrives in its regular timeslot in January. The network previously picked up Transplant and has been airing it during the current fall television season.

NBC shared more about this new series in a press release.

“Fresh off its highly successful acquisition of the Canadian medical drama Transplant, NBC has acquired in a competitive market the hospital-set Canadian series Nurses from Entertainment One (eOne) and ICF Films.

Nurses, filmed and set in Toronto, follows five young nurses working on the frontlines of a busy downtown hospital, dedicating their lives to helping others, while struggling to help themselves.

Premiering earlier this year on Global TV, the series launch became the most-watched premiere episode of a scripted Canadian series in over two years for total viewers. Season two wrapped filming in Canada earlier this year.

The Nurses pick-up follows the success of NBC’s Canadian import Transplant, which premiered Sept. 1 and has averaged 5.6 million viewers overall in “live plus seven day” Nielsens, with the premiere having grown to a 5.9 million total viewers to date and the second episode outpacing the premiere and expanding to more than 6 million. Transplant has scored as one of television’s most time-shifted shows through its NBC run, with each of its first seven original telecasts ranking as the #1 drama of the week in “live plus three day” lift.

The recent Oct. 20 Transplant episode set new series records for the show’s U.S. run, doubling the prior week’s “live plus same day” rating in adults 18-49 and growing in total viewers by 1.5 million viewers.”

What do you think? Will you check out Nurses on NBC? Have you been watching the Transplant TV series?

I will check out Nurses. I love Transplant without question.

Sorry, but Transplant is much better than Nurses. But, it’s okay for keeping you entertained pre-COVID. Not a mask in sight. We just finished Trickster from the CBC – not a medical show, but extremely well done. It takes place in British Colombia.

Will be checking out Nurses. Hope it’s as good as Transplant. Really like Transplant.