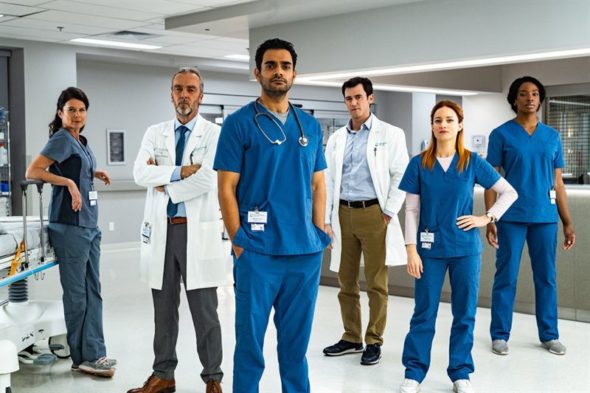 TV show description:
A medical drama series that originates on CTV in Canada, the Transplant TV show follows an immigrant physician who struggles to rebuild his life in a new country.

Doctor Bashir Hamed (Haq) is a charismatic Syrian doctor with battle-tested skills in emergency medicine. He and his younger sister, Amira (Gulamgaus) flee their war-torn homeland and become refugees, struggling to forge a new life in Canada. If Bash wants to be a doctor in his new home, he must redo his medical training from the ground up and obtain a coveted and nearly impossible residency position.

When a horrific truck crash nearly kills a senior doctor right in front of him, Bash saves the doctor’s life and earns a residency in the biggest Emergency Department of the best hospital in Toronto. Still, Bash has a long and difficult road ahead.

The talented team works tirelessly to save lives while trying to win the approval of the legendary head of the Emergency Department, Doctor Jed Bishop (Hannah). The team is managed by sharp-eyed, acerbic Doctor Wendy Atwater (Smith) and supported by Claire Malone (Higginson), the deadpan and confident longtime head nurse.

Through it all, Bash tries to meet the demands of his new country and a new job, while trying to pay the bills, raise his little sister, and carve out a new life for them both in this unfamiliar land.

What do you think? Do you like the Transplant TV show? Do you think it should be cancelled or renewed for another season?

This show is awesome I hope it continues !!!!!

This is without a doubt one of the top 5 tv shows. Please keep it going. Thank you, Sue-z

Please bring the show back! It is excellent, and helps to put diversity in a positive light, which our country needs now!

I enjoyed the first season and was looking forward to more. Sad that shows without alot of cursing & some what family oriented get terminated.

My husband and I love the show. We’ve watched all of the first season and we are really looking forward to season 2.

Love the show! Please keep it!!!

Please bring the show back.

please bring it back enjoyed the show

Please do not cancel this show. It has become a favorite of ours.

I was absolutely mesmerized from the first few minutes of episode 1. I think the show is terrific and I can’t wait until the next show.