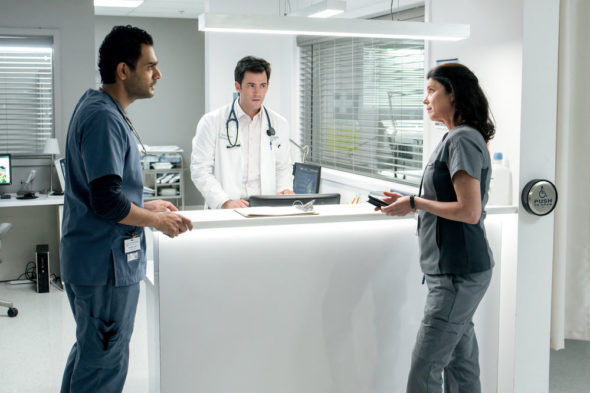 The Transplant team is on the move at NBC. The Canadian medical drama series is relocating to Saturday nights starting this Saturday, May 28th at 8:00 PM. Is the series being cancelled or could it still return for a third season?

The Transplant TV show stars Hamza Haq, Laurence Leboeuf, John Hannah, Jim Watson, Ayisha Issa, Linda E. Smith, Torri Higginson, Gord Rand, Nora Guerch, and Ahmad Meree. Doctor Bashir Hamed (Haq) is a charismatic Syrian doctor with battle-tested skills in emergency medicine. He and his younger sister, Amira (Gulamgaus), flee their war-torn homeland and become refugees, struggling to forge a new life in Canada. When a horrific truck crash nearly kills a senior doctor right in front of him, Bash saves the doctor’s life and earns a residency in the biggest Emergency Department of the best hospital in Toronto. Bash tries to meet the demands of his new country and a new job, while trying to pay the bills, raise his little sister and carve out a new life for them both in this unfamiliar land. In season two, boss Dr. Jed Bishop (Hannah) has suffered a stroke and Bash and his team must adjust to both new colleagues and new challenges.

Airing on Sunday nights, the second season of Transplant has been averaging a 0.16 rating in the 18-49 demographic and 1.18 million viewers in the live+same day ratings (includes all DVR playback through 3:00 AM). Compared to season one, that’s down by 64% in the demo and down by 66% in viewership. It’s the lowest-rated series currently on NBC.

The series is produced in Canada by Sphere Media in association with CTV and Universal International Studios, a division of Universal Studio Group (a part of NBC’s parent company, NBCUniversal).

Transplant was renewed for a third season in February and since NBCUniversal co-produces the drama, it makes sense that one of the corporation’s outlets will release season three in the United States. If viewership is too low to justify airing it on NBC, a move to the Peacock streaming service seems likely.  Hulu currently carries the first season and all of the already-released episodes of season two.

What do you think? Have you kept up with the Transplant TV series? Are you hoping that NBC will pick up season three? Would you watch on Hulu or Peacock?

Viewership might be significantly greater if they didn’t keep changing nights and if season two had been properly advertised. It’s a great show that hasn’t been given a solid opportunity. Why move it to a Saturday night when most people are out if it had a strong start on it’s original day and time? Geesh, common sense isn’t so common anymore!

Yes excellent medical drama. However, I wish that they would stop moving it around–currently starting on Saturday May 28th–as they also don’t advertise/market it very much either which is why I think so many people are missing out on this wonderful show. I have checked every Saturday since May 28th and it hasn’t been on. Just read where it returns July 1st-2nd whatever that Saturday is in July. It may have been renewed for the third season in Canada but here in the US, if they don’t give it some stability, it’s not going to last. Luckily I do have… Read more »

Yes! Love Transplant! Great characters and story lines. I hope it comes back and stays on NBC.

Yes. I like Transplant. I’m glad it’s been renewed. But hopefully it will stay where its at since I don’t have Peacock streaming service.

Excellent show. Moving it to Saturday and not telling anyone or advertising it is probably the only reason for the low ratings. This is shameful

I really enjoy this show, and currently have watched it on Hulu. I also have peacock too. This is a quality show.

I absolutely love this show. I was anxiously awaiting season 2 and finally found it by accident. The network did nothing to promote it, keeps changing the day and time it is aired, does not announce next airing. Please give it the respect it deserves as an excellent medical drama with a unique story line. How sad that you are offering “Dancing with Myself” instead of this stellar series.

So upset this FANTASTIC MEDICAL drama is being RUINED BY NBC!
Again, tonight, SATURDAY, June 11, 2022- TRANSPLANT is NOT showing!! I wait each week to watch this GREAT SHOW, only to see a kids movie airing!
Please, NBC, don’t ruin our GREAT SHOW!! The FANS will return, if you would just air it regulating on a specific day of the week!!

Transplant is such an excellent show, please don’t cancel the 3rd season on NBC and force me to subscribe to a streaming subscription

Excellent…as a retired ED nurse, I could appreciate so much

I love this show and all the actors in it, especially Hamad Haq and John Hannah. Please, please don’t cancel it or move it away from NBC!!! It’s really wonderful and very well done. Great show!!!

Good show. Brings PTSD into the workplace from a different angle. They all have some form of demon chasing them. Real life stuff.

Hate to see relevant shows blown away to be replaced by the moronic drivel seems to be the trend these days.

I don’t think NBC has given this series a chance. It will be on for a week or two, then it takes months before the next show is on. They have changed the night it is shown several times–so if you are a fan, you often have NO clue what day or time the next show in the series can be seen. I’d much rather see this series than the ridiculous junk most networks revert to over the summer.