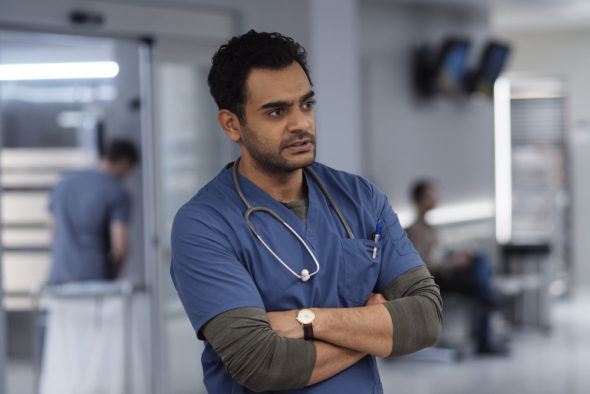 Transplant has been renewed for a third season by CTV. Season two is set to air on NBC next month. The network has not yet picked up the Canadian medical drama’s third season yet but it seems likely that they will.

CTV revealed the following about the renewal of the medical drama:

“CTV announced today that it has renewed Canada’s most-watched original drama series TRANSPLANT for a third season. Produced by Sphere Media in association with CTV and Universal International Studios, a division of Universal Studio Group, Season 3 of the CTV Original drama consists of 13 one-hour episodes. New episodes of TRANSPLANT’s second season continue Mondays at 10 p.m. ET/PT on CTV, CTV.ca, and the CTV app, before moving to its new timeslot of Tuesdays at 10 p.m. ET/PT beginning March 1.

Filming on Season 3 will take place in Montréal, with Hamza Haq (MY SALINGER YEAR) reprising his role as Dr. Bashir Hamed – known to most as Bash – a talented doctor and Syrian refugee who fled to Canada and was granted a second chance to practice Emergency Medicine at York Memorial Hospital in Toronto.

The series continues to resonate with audiences across Canada as the most-watched Canadian drama series with total viewers and in the key A25-54 demo, with a current season average of 1.1 million viewers. TRANSPLANT has also had international success, having been embraced by U.S. viewers on NBC, with Season 2 set to premiere March 6 at 10 p.m. ET. The drama has also launched across the UK, Australia, Spain, Germany, the Netherlands, and more.

“Viewers around the world have embraced TRANSPLANT, and we look forward to bringing this exceptional cast back as we continue to tell the stories of York Memorial Hospital,” said Justin Stockman, Vice-President, Content Development & Programming, Bell Media. “With our partners at Sphere Media and Universal International Studios, Canadians can look forward to more of the emotional and gripping narratives they have come to love.”

“It is once again an immense privilege for us to continue the TRANSPLANT adventure with such great partners as Bell Media and Universal International Studios,” said Jocelyn Deschênes, President, Chief Executive Producer International – Original Fiction Content, Sphere Media. “TRANSPLANT has touched the hearts of many viewers around the world and we’re confident that Season 3 will grasp their attention even more.”

What do you think? Are you excited to see season two of Transplant on NBC next month? Would you watch season three if the network picks it up?

My husband and I luv transplant. Advertise more. Bring it back. Great acting

My husband and I have found Transplant to be one of our favorite shows. We hope there are seasons past Season 3 as the stories can go on for a long time. The genuineness of the portrayal of the characters is so true to life. This show is one of the best medical dramas we have EVER seen.

Transplant is my very favourite show, Bash and His Flirty Dr girlfriend Please ❤️ They make a fabulous couple not his Ex Nope

It’s about freaking time- I really like this show. THIS is a medical show- much better than the irritating Good Sam.

Really like “TRANSPLANT”! Glad there’s going to be a third season.

Although not as great as season 1, season 2 so far is pretty good- glad it’s been renewed for a third

Love this show! Glad it is being renewed.

I’m in the U.S., and I very much hope it will be renewed here. It’s probably the best medical drama I’ve watched, going back to the 1960s. The characters as well as the medical situations are generally complex and really hold one’s interest.