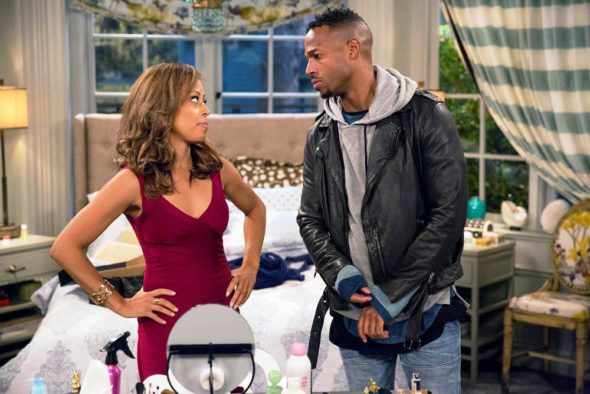 Are you watching Marlon? The NBC TV show ends its first season tonight, September 13th, and we want to know if you would watch a second season.

Loosely based on the life of co-creator Marlon Wayans, the sitcom centers on internet superstar Marlon Wayne (Wayans), who is a devoted — if whimsical — father. He and his ex-wife Ashley (Essence Atkins) are committed to having a happy divorce, as they parent their teenaged daughter Marley (Notlim Taylor) and younger son, Zack (Amir O’Neil). The cast also includes Bresha Webb and Diallo Riddle.

Since its August debut, Marlon has performed decently in the ratings. So far, its freshman season is averaging a 1.06 rating in the 18-49 demo and 4.270 million viewers, making it one of NBC‘s higher-rated series for summer 2017.

But what do you think? Should Marlon be renewed for a second season or cancelled?

Check out more details about the series’ two-part season one finale, which begins tonight, September 13th, at 9 p.m. ET/PT.

END OF THE ROAD” ORIGINAL

09/13/2017 (09:30PM – 10:00PM) (Wednesday) : The first wedding anniversary since their divorce leads Marlon (Marlon Wayans) and Ashley (Essence Atkins) to rehash the details of their first date. They each have very different recollections of how it went down. Bresha Webb, Diallo Riddle, Notlim Taylor and Amir O’Neil also star. TV-PG D, L”

This was one of the best family shows on TV
Always looked forward to seeing it.
Just goes to show That comedy shows that deal with real life family issues are the best prime time shows for any household
So refreshing to see
Please bring this show back.

Yes I would definitely watch the show for a second season and even more I would recommended it to other viewers. It’s so funny.

Yes!! I would watch the second season without a doubt in my mind!

OH MY GOODNESS! I absolutely LOVE this show. It is soooo hilarious & would gladly welcome another season!!!