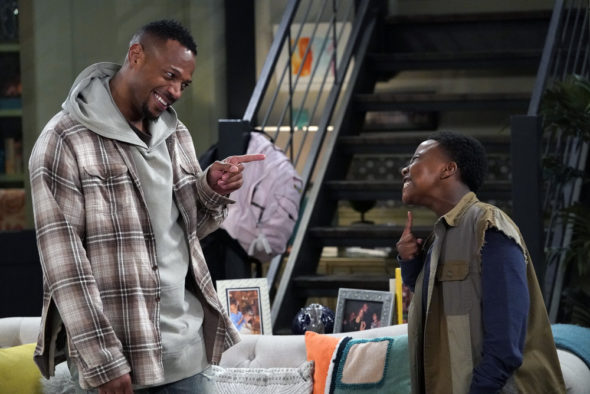 An NBC family sitcom, Marlon is loosely inspired by star and co-creator Marlon Wayan’s life. The series also stars Essence Atkins, Notlim Taylor, Amir O’Neil, Bresha Webb, and Diallo Riddle. The story centers on internet superstar Marlon Wayne (Wayans), who is a devoted — if whimsical — father. He and his ex-wife Ashley (Atkins) are committed to having a happy divorce, as they parent their teenaged daughter Marley (Taylor) and younger son, Zack (O’Neil).

The second season of Marlon on NBC averaged a 0.61 rating in the 18-49 demographic and 2.64 million viewers. Compared to season one, that’s down by 43% and 38%, respectively. Find out how Marlon stacks up against other NBC TV shows.

Will NBC cancel or renew Marlon for season three? The network is airing episodes in pairs which sort of feels like a burn off. The ratings are also way down so I suspect that the network won’t be ordering a third season. I’ll keep a hungry on the ratings and update this page with breaking developments. Subscribe for Marlon cancellation or renewal alerts.

What do you think? Were you hoping that the Marlon would be renewed for season three? Are you sorry that NBC cancelled this TV show, instead?

Been watching on Netflix it really should come back.

I wish I knew it was on before it was canceled because I would have watched it. This is the best comedy show I have ever seen in a long time. I haven’t laughed at a comedy show like this in years. Reminds me of Marlon’s older movies and the awesome funny actions like the good old days. Please renew this show for everyone’s sake we need to laugh. Love this show, you got to see it.

They need to renew the seasons. I have watched the two season 4 times…can’t get enough of the jokes. Very good show Netflix should take it and do the third season

This show is simply amazing I wish I knew it was on I would have been watching every show. I am watching it on Netflix and hope they pick it up

Renew it for season three. Love the show.

I really really enjoyed the Marlon show and feel Mr. Marlon Wayans should not allow NBC to stop this show he should let Netflix take it. NBC is going down. No is going to watch their lame boring shows that they have coming up anyway.

Hope they bring the show back for a 3rd season.

OF COURSE MARLON NEEDS TO BE RENEWED..
IT IS THE FUNNIEST SHOW ON TV..
.MARLON, IS TODAYS BEST COMEDIAN

HE IS THE ONLY PERSON WHO CAN MAKE ANYONE LAUGH…

Season 3 PLEASE!!!!!!! I love it!! I feel it’s definitely not marketed/ plugged/ advertised enough!!! NBC needs to step it up!

Shows not even popular enough to get comments trying to save the show. LoL

Huge fan and ready to see a latest season.