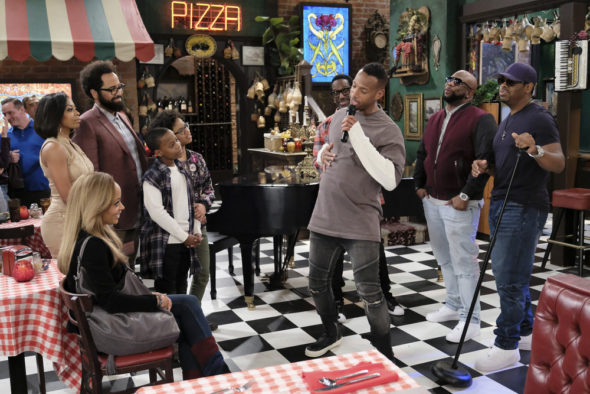 Get your renewals here. Fresh, hot renewals. NBC has renewed Marlon Wayans’ Marlon TV show for a second season. The first season of this summer sitcom premiered on August 16th, and ran for 10 episodes, with the Marlon season one finale airing on September 13, 2017.

A scripted NBC comedy series, Marlon stars Wayans, Essence Atkins, Notlim Taylor, Amir O’Neil, Bresha Webb, and Diallo Riddle. The story centers on internet superstar Marlon Wayne (Wayans), who is a caring — if unconventional — father. He and his ex-wife Ashley (Atkins) are committed to having a happy divorce, as they parent their teenaged daughter Marley (Taylor) and younger son, Zack (O’Neil).

Marlon: A Look at the Ratings

Whether NBC will order a longer second season, and whether Marlon season two will continue as a summer series, is still up in the air.

Both The Futon Critic and Deadline have confirmed Marlon season two renewal with NBC.

What do you think? Did you enjoy the first season of the Marlon TV series? Do you plan to check out the second season on NBC? Let us know, below.

I’m definitely going to watch the season 2 when it premieres in the summer (2018). I just like the story plot and the laughter during the scenes. I want to go n watch the filming of it as well.

Please Bring back the show

It’s been a long time that a show really caught my attention..Marlon reminds me of the good ol days like Full House,shows with a meaninv and very funny.My teenagers look forward to this show and actually watch it with me.As a mother,i really like the message from the show,and Marlon as always funny talented man;)

Now that’s great. Was really hoping to hear this and NOT the opposite. Give it a better time slot though.

Haha, me too… I’ve looking at the ratings because I didn’t want to start it and just have NBC cancel it, now I feel like I have to watch it!

This show is a great alternative to sleeping pills! It is sooo boring that it puts me to sleep within a matter of minutes! Thank You Marlon for helping me sleep at night!