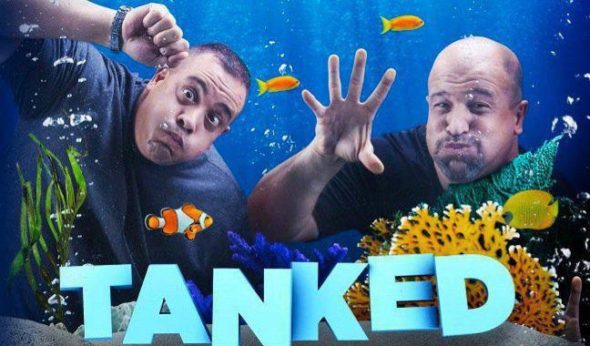 Tanked is coming back for a 13th season! Animal Planet has renewed the series for another series, which they promise will be bigger and better than previous seasons.

Animal Planet revealed more about the renewal of this series in a press release. Check that out below.

“Wayde King and Brett Raymer of Animal Planet’s TANKED are two of Sin City’s most imaginative businessmen and owners of Acrylic Tank Manufacturing (ATM), one of the country’s most successful builders of elaborate aquariums. On the series, the guys have been tasked with building awe-inspiring tanks and aquariums for celebrities and athletes, luxury hotels and casinos, Fortune 500 businesses and private homeowners. Wayde and Brett take their tank build talents to a whole new level by tackling sports stadiums when TANKED returns for a new season Friday, October 6 at 9 PM ET/PT.

Wayde and Brett are challenged this season on TANKED by intricate designs, demanding clients and making the impossible possible. Celebrity clients include world renowned athletes such as Antonio Brown of the Pittsburgh Steelers, Adrian Peterson of the New Orleans Saints and the NBA’s Anthony Davis of the New Orleans Pelicans. Also, returning client and NBA great Dwight Howard of the Charlotte Hornets calls on his favorite aquatic innovators to create a new home for his two beloved snakes.

In addition to one-of-a-kind tanks in athletes’ homes, Wayde and Brett take on stadiums this season with a 14-foot, 1300-gallon outdoor saltwater tank designed and installed for the San Francisco Giants outfield and a 2000-gallon racetrack shaped shark tank installed for the San Jose Sharks to brighten up their newly renovated Chairman’s Lounge.

Are you a fan of Tanked? Will you watch season 13? Tell us what you think.

Tanked is a funny and educational program that should be on for 300 more seasons and have at least 15 episodes a season. It not only educational, but it also gives people like me. Ideas for a Tank when able to afford one.

i been wanting tanked now for 12yrs and i enjoy wade,bret,red and the rest of them.the family is great ,enjoy the amazing tanks they built for stars