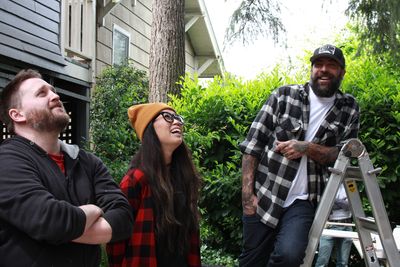 The docuseries follows designer Antonio Ballatore as he and “his team of experts and his sidekick rescue dog Edie, take transformations to a whole new level by turning dull, cramped homes and yards into awe inspiring spaces for both pets and their families.”

ANIMAL CRIBS returns for an all-new season, featuring designer and animal enthusiast Antonio Ballatore, winner of HGTV’s Design Star and lead on HGTV’s The Antonio Treatment. The California-based designer is on a mission – one that will allow families and their animals to live together in harmony. Season two of ANIMAL CRIBS premieres Friday, March 1st at 9 PM ET/PT.

Antonio, his team of experts and his sidekick rescue dog Edie, take transformations to a whole new level by turning dull, cramped homes and yards into awe inspiring spaces for both pets and their families. The goal? To improve the lives of pets and the people who love them. In an effort to deliver the best possible result, Antonio visits animal experts, trainers, and rescue centers to learn what all kinds of pets, from bunnies to bearded dragons, need to live healthier, happier lives. Each creation is inspired by Antonio’s love for animals, and his eye for design.

Growing up with dogs, goats, rabbits and even ducks, Antonio is right at home this season when he converts a basement into the ultimate chinchilla habitat; completes a front yard facelift for Mr. Pickles, the pot-bellied pig; designs a huge indoor basement jungle for a firefighter’s 20-foot python; and gives back to a farm rescue with designs to enrich the lives of goats, sheep, llamas, cows, emus, and pigs.

The first season of ANIMAL CRIBS can be watched in its entirety by audiences in the US on the Animal Planet Go app.

What do you think? Have you seen Animal Cribs? Will you watch the new season?

I just love the show! Glad it is back!

This show is wonderful! He truly understands and makes no judgement on how people can love any animals and want to live in harmony with them. I have the perfect household for this show.

I love this show! I wish i could afford Antonio to come to me. I love everything about the show, it’s amazing to watch the before and after. I don’t think Antonio would come this far but I will still enjoy watching and being amazed. Love the show and staff

Hi,
Could you tell me how to audition for the show? Or how much does it cost to have you build me a crib for my 3 rescued birds? Thanks, Vicki

This is my favorite program. Everyone on the program and especially Anthony are so personable and professional that the program is irresistible. Love, love, love it.

I absolutely love Animal Cribs it’s such an awesome show & watching Antonio who is very handsome is pretty nice also, what an awesome thing to do for the animals! Thanks everybody .

Of course I will be watching the new season. I would be heart broken if they take this show off the air. I’ve gotten many of my friends watching the show too.
Antonio and the team are amazing with their ideas and love of animals. They need more shows like this that is for animals and the people that love them. Keep up the amazing work you do and thank you for doing it.

What happened to the original Animal Cribs cast members?

This is one of my favorite shows and have been waiting for the new season to start which it has , HOORAY!! Talk about zoos, we have three rescue dogs and unfortunately one of them dislikes dogs so the house is divided with a crate a wall when all three are downstairs. Not to mention two grandkids under the age of 6 and me (grandma) who is the main caregiver of dogs and spends her time locking and unlocking gates, crates, doors. And the parents of the little ones. My own zoo! This show gives me ideas though I wish… Read more »

Absolutely I love this show I have my own zoo and he inspires me to want to give my animals specialized homes. Even the seven dogs watch with me. The cats watch but turn their backs when they focus on together building bc all six think only cats should be stars. My three ferrets are upset with me When they saw the special ferret wall wanted to know when they are aren’t going to get one. I refuse to let the nine rabbits see the cool indoor outdoor cage or the bird in the aviary see the bird dome I’ll… Read more »

Love this show and what you do for the animals! We will definitely continue to watch. My daughter loves the show also.