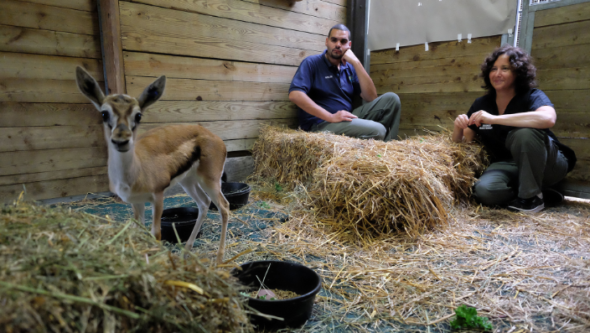 Animal Planet is headed back to the Bronx Zoo. This week, the network announced a second season of The Zoo will debut in March.

The docuseries goes behind the scenes of the Bronx Zoo and “focuses on the level of care given to the animals, the bond that exists between the animals and the staff, and how the higher purpose of zoos and aquariums is conservation of species in the wild.”

Season two of The Zoo premieres on Animal Planet on March 10th at 9 p.m. ET/PT.

Animal Planet’s THE ZOO, the first-ever series to go behind the scenes at the world-famous Bronx Zoo, returns for an all-new season on Saturday, March 10 at 9 PM ET/PT. THE ZOO shares an unscripted look at the knowledge and diverse skills needed to operate a zoo. It focuses on the level of care given to the animals, the bond that exists between the animals and the staff, and how the higher purpose of zoos and aquariums is conservation of species in the wild.

All-new stories and animals this season include Dave, a red kangaroo who bounces back from arthritic symptoms after undergoing chryotherapy; breeding komodo dragons; keepers training bats, a golden eagle and Indian gharials; the head-starting of hellbenders, a giant salamander found in Eastern North America, for introduction into the wild; and how a keeper deals with retiring after 31 years of caring for Happy, Patty and Maxine, the zoo’s three female Asian elephants.

This season, viewers can also catch the new original mid-form series, THE ZOO: FROM THE INSIDE, which takes audiences behind the scenes and offers them exclusive looks at operations zoo guests never see. Stories include: an after-hours look at the animal commissary, where food is stored and delivered every night for the animals; feeding time with tigers and baby penguins; and much more. The web series will be available to fans on Animal Planet GO and Facebook Watch.

THE ZOO premiered in Feb. 2017 to 1.1 million Total Viewers and pushed Animal Planet into ad-supported cable’s Top 10 in the timeslot among viewers. Throughout the season, every episode of THE ZOO averaged more than one million viewers making it Animal Planet’s most watched freshman series since July 2015.

The first season of THE ZOO can be watched in its entirety on the Animal Planet Go app which allows viewers to watch live and catch up on full episodes of their favorite Animal Planet programs on multiple devices anytime, anywhere.

What do you think? Have you seen The Zoo? Will you watch season two?

I know this is probably ages after the event , but i love the show the most out of all other overseas Zoo shows . The only problem i have is the vet who was involved in the diagnosis of the baby snow leopard in Series 2 ep one which we are only getting to see now . I did not get that he had never heard of or knew what to do with condition of swimmers which is what the baby was suffering . For a Zoo vet i really thought they would need to be aware of all… Read more »

My son and I drove to the Bronx to visit the zoo after watching the show. So glad new episodes are coming out. Now we can see our new friends. (YES guys, they are that nice in person!)

I love The Zoo and never miss it. I even watch all of the reruns too. I hope that this series continues for many years. So informative…interesting…touching…
and funny.

I so love this show getting to see behind the scenes is so cool.. Learning about animals that I had no Idea existed. This is such an exciting series.. I hope to see seasons 3,4,5,6,7,8,9,..

I am putting in my request for a season 3, 4, 5…… of the zoo on animal planet. Love both zoo shows…the one in England too. Please make millions of viewers Happy !!!

I just LOVE The Zoo! It is so interesting to see the relationships the staff have with their animals and how the animals seem to love them right back. Please give us a Season 3!!!

I absolutely loved the show and watched it all the time. I really appreciate the fact that you give us the chance to see what you do behind the scenes. I have to say that I have never been a fan of flamingos until I saw dinky. I saw how she fought her way back to the flock and she had me hooked after that. Now everywhere I go I’m looking for a dinky.

This is my favorite show. I want to quit my job and go work at the Bronx zoo

Really Enjoy this show .. what a learning experience.. looked forward to each episode.. Looking forward to next season …

I always DVR’d The Zoo so that my husband and I could watch together. What a great show….love watching all the keepers and their animals. Please keep this show on the air!!

I love this show. I miss seeing the animals and love the keepers. When nothing else is on I go to my recordings and watch my favorites. I have learned so much about animal behavior and how important it is to respect each animal as a living being. Can’t wait for season 3.

I love The Zoo on Animal Planet and pray for a season three!

Fabulous. Can’t wait for season three. It’s a remarkable team and show with an extraordinary message.