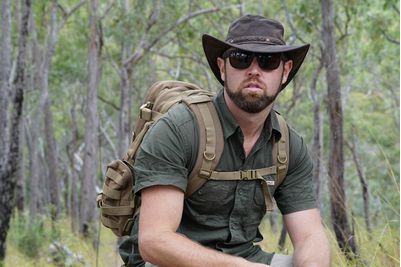 Animal Planet is up for a new adventure. Recently, the network announced their upcoming TV show Extinct or Alive will premiere in June.

The docuseries follows “adventurer and biologist Forrest Galante as he explores the real stories behind animals thought to be gone forever and tries to prove their existence so he can protect them and help them thrive again.”

Extinct or Alive premieres on Animal Planet on June 10th at 9 p.m. ET/PT.

What if extinct animals weren’t really extinct? The methods used to declare a species extinct are not as fool proof as people might assume.  From eyewitness accounts to last known photographs, there is evidence that suggests some of these creatures are still very much alive in the wild. The search is on for wildlife adventurer and biologist Forrest Galante, as he explores the real stories behind animals thought to be gone forever and tries to prove their existence so he can protect them and help them thrive again. EXTINCT OR ALIVE premieres on Animal Planet on Saturday, June 10 at 9PM ET/PT but you can catch a sneak peek episode during Monster Week on June 3 at 10PM ET/PT.

The season kicks off with a must see two-hour season premiere, where Forrest explores the magical and mystical jungles of Zanzibar in search of the Zanzibar Leopard, an animal thought to be extinct for over 25 years. It’s a history-making expedition in which Forrest reveals species that have never before been filmed and captures evidence that leads to an unforgettable conclusion. The hunt for other extinct animals will take him trekking through Taiwan for the beautiful Formosan Clouded Leopard, the frozen tundra of Newfoundland for the majestic Newfoundland White Wolf, and to the incredible island of Madagascar to look for any trace of the giant Pachylemur.

From the Florida everglades to remote jungles, the cameras follow Forrest Galante as he meets and listens to locals, some whom claim to be eyewitnesses of animals we thought were no longer in existence. Armed with the information and clues, Forrest sets out to prove the unimaginable, and be the voice for species the world has given up on.

What do you think? Do you watch Animal Planet? Will you check out Extinct or Alive?

I just wish he would stop trying to be like Steve Irwin, u know what I’m talking about. He should do good on his own. I started watching and loved the show, (I watch Animal Planet all day long starting at 5am with Crocodile Hunter), so I was watching Extinct or Alive and he was with sting rays and made a comment about u should not swim above them or u will get the barb and we changed the channel immediately. My whole family just made a big oh no he didn’t just say that.

In 1978 I found a carrier dove supposedly extinct since civil war!

I have lived in the Tampa Bay area all my life. Running the woods and creeks and river’s since I was a small kid with a bb gun bow and arrow to big guns.. Riding Horses And just riding the woods. And I have seen multiple Panthers most of were Brown.. But in Wesley Chapel in the 80’s I seen a solid Black Panther.. And in Zephyrhills off Hwy 54 west I seen a solid Black Panther.. So say what you want I know they exist.. And as for the Black Wolf, about 5 year’s ago again in Wesley Chapel… Read more »

I feel he leads hunters to just the right place to finally kill off what is left of some of these
animals. He says he is trying to get funding for the animals preservation but by the time he would acquire the funds hunters would have already done their work and there would be nothing to preserve. I would believe more in his mission if he would stop telling the world exactly where he is going.

He stood by while all those whakes were slaughtered in the most cruel way possible. Forest stood by and did and said nothing. I will never ever watch this show again

he could not do anything.He did not have the authority to interfere. Lots of animal activist try and fail. Putting there lives in danger. I am not saying i disagree with your comment. Rest assure i understand.

I have seen the Black Panther of North America. I have seen it 2 times in my life.. Once with two other guys.. I live in West Virginia.. I seen the two about ten miles apart.. and about 5 years apart… Email if you are interested in info and locations..
I have heard others seeing them when i was growing up…

I love the show. I find it interesting and entertaining. I do want to know why the cast members do not wear Snake Boots and other protective clothing? Jungles are too dangerous not too.

I like the show. It is very interesting and entertaining. I do want to know why the cast do not wear Snake BOOTS and protective clothing?

Very disappointed, this seems to be “Sasquatch” hunting on steroids…….. I sure was hoping for more…..

Me too. He needs to stop being a copy cat. Very disappointed

I would love to see an Extinct or Alive show about the Ivory-billed Woodpecker. Sighted a late as 2008 and possibly more recent at the Pearl River in Louisiana.

Look into the Ivory billed woodpecker, rumored to be seen in swamps of Arkansas