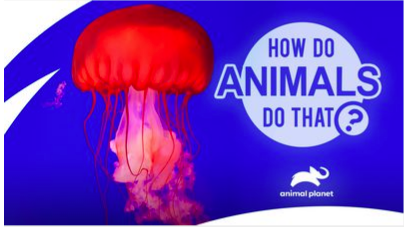 Are you fascinated by animals? Recently, Animal Planet announced Downton Abbey star Hugh Bonneville will narrate their new TV show, How Do Animals Do That?

The docuseries “will take audiences on a journey to find answers to some of the most asked questions about the animal world.”

How Do Animals Do That? premieres on Animal Planet on January 6th at 9 p.m. ET/PT.

Animals are extraordinary, and they do seemingly impossible things that leave humans in absolute awe. Animal Planet will take audiences on a journey to find answers to some of the most asked questions about the animal world in the all-new series, HOW DO ANIMALS DO THAT?, narrated by Hugh Bonneville (Downton Abbey, Paddington), premieres Sunday, Jan. 6, 2019 at 9PM ET/PT with two back-to-back episodes each week.

How do electric eels not electrocute themselves? Why don’t penguins’ feet freeze on ice? Why do dogs wag their tails? How do cats always land on their feet?  What makes some people mosquito magnets? And do elephants really never forget? The awe and wonder of animals are on full display in HOW DO ANIMALS DO THAT? as these questions and other mysteries are explored each week as Animal Planet presents the natural world up close, with rare footage of animals captured in new and surprising ways.

What do you think? Do you watch Animal Planet? Will you watch How Do Animals Do That?

I specifically Googled who narrates How Do Animals do That? as I found the narrator quite humorous. Since I have never seen Downton Abbey, I didn’t recognize his voice. Today is the first time I watched this show (watched 4 episodes) and very much enjoyed it. I am one of the world’s biggest animal lovers, especially dogs, so this show was right up my alley! I found it both entertaining as well as informative. Thank you for such a high quality show! I hope Mr. Bonneville will continue as narrator as well.