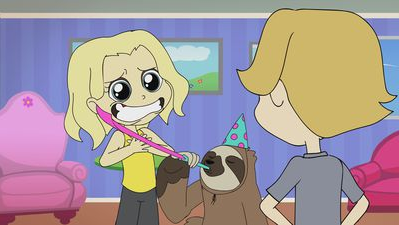 The series features “the animated accounts of unexpected and surprising encounters between animals and the celebrities who lived to tell their stories.” Guests include Kristen Bell, Danny Trejo, Whitney Cummings, Moby, Judy Greer, and more.

Whether it’s on set, at home or far from civilization, the animated accounts of unexpected and surprising encounters between animals and the celebrities who lived to tell their stories are featured in Animal Planet’s new series, CELEBRITY ANIMAL ENCOUNTERS which premieres Friday, July 27 at 10PM ET/PT. The series, which launched a handful of episodes in a limited run on Facebook Watch, drew almost four million views. All-new stories and all-new celebrity animal run-ins will be featured throughout the season.

In each episodeofCELEBRITY ANIMAL ENCOUNTERS, actors, musicians, athletes and influencers share their personal encounters with animals which led to loveable, crazy, shocking, dangerous and outright hilarious moments that forever changed their lives. Kristen Bell explains the true story behind her now famous encounter with a sloth; Al Roker describes what it was like to be trapped in a tent by a bear who was desperate for his food; Whitney Cummings will keep audiences on the edge of their seats as she recounts her experience of battling a crew of coyotes who camped out in her yard, fixated on her newly adopted dog; and Danny Trejo reveals he truly has a heart of gold when he rescues a very lost and wayward dog who was in desperate need of love and a home. These are just some of the true stories featured in the new animated series. Other episodes will feature stories from Justin Hartley, Moby, Kate Micucci, Danny Trejo and Judy Greer, among others.

What do you think? Are you a fan of celebrities and animals? Will you watch Celebrity Animal Encounters?