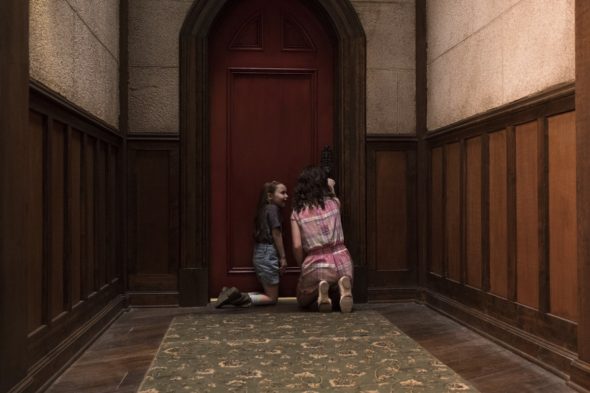 The scares will continue on Netflix. The streaming service just announced they’ve renewed The Haunting of Hill House for a second season.

Now called The Haunting, season two of the anthology series will feature an adaptation of Henry James’ famous novella The Turn of the Screw and is titled The Haunting of Bly Manor.

Season two of The Haunting is slated to debut on Netflix in 2020.

A new Haunting is coming. Can you guess where it takes place? Listen closely… pic.twitter.com/vqzrd3z4NZ

Hollywood, Calif. – February 21, 2019 — Netflix has entered into a multi-year overall television deal with Mike Flanagan and Trevor Macy. Following the success of The Haunting of Hill House, Flanagan and Macy will develop and produce new series exclusively for Netflix, including an all-new chapter in The Haunting anthology, with the next installment chronicling a new story with all new characters.

Beginning with this new deal, Macy and Flanagan make official their prolific seven-year partnership, which has generated six movies and a series, under the Intrepid Pictures banner. Intrepid will continue to produce both television and features; so far the partnership has resulted in six films including Gerald’s Game, Oculus, and Hush as well as Netflix’s first original horror series The Haunting of Hill House, a modern reimagining of Shirley Jackson’s iconic novel, produced with Paramount Television and Amblin Television.

“Mike Flanagan and Trevor Macy are masterful at creating authentically frightening stories that leave audiences on the edge of their seats, but unable to look away,” said Cindy Holland, Vice President, Original Content at Netflix. “We’re excited to continue our partnership with them on The Haunting series and future projects to come.”

“Netflix has been an important part of our story, and we’re proud to have worked with them on The Haunting of Hill House, not to mention Gerald’s Game, Hush, and Before I Wake,” said Flanagan and Macy. “They’ve enabled and supported a great deal of our work and we look forward to much more.”

In features, which are separate from this deal, Flanagan and Macy are in post-production on Doctor Sleep, the feature adaptation of Stephen King’s 2013 follow-up to his seminal novel The Shining, starring Ewan McGregor and Rebecca Ferguson, at Warner Bros. Pictures, for a November 8, 2019 release. Flanagan directed and penned the adaptation, while Macy produced with Jon Berg. Intrepid is also in post-production on Eli, directed by Ciaran Foy and produced by Macy, which will be released on Netflix globally later this year.

The Haunting of Hill House is a modern reimagining of Shirley Jackson’s iconic novel, produced with Paramount Television and Amblin Television. After being released in October 2018, the show quickly became an online sensation generating strong reviews and garnering award nominations from the Motion Picture Sound Editors, Writers Guild of America, and Art Directors Guild. In addition to Flanagan and Macy, the show was executive produced by Meredith Averill and Co-Presidents of Amblin Television Darryl Frank and Justin Falvey.”

What do you think? Did you see The Haunting of Hill House? Will you watch season two?

My Fiance’ and I were looking for something to watch on Netflix last night and decided on Haunting of Hill House. Well needless to say we binge watch the entire series and absolutely loved it. I couldn’t look away. The actors were amazing and I cried at some parts and was terrified at others. I cant wait for Season 2 and I will recommend this Series to everyone..who hasn’t already seen it.