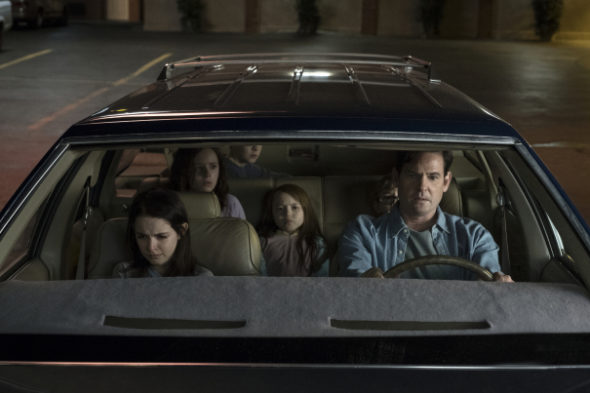 Are you watching The Haunting of Hill House? Recently, creator Mike Flanagan spoke with Entertainment Weekly about the future of the Netflix TV show.

Inspired by the novel by Shirley Jackson, the horror drama follows “a group of siblings who, as children, grew up in what would go on to become the most famous haunted house in the country.” The Netflix series stars Michiel Huisman, Carla Gugino, Timothy Hutton, Elizabeth Reaser, Oliver Jackson-Cohen, and Henry Thomas.

In the interview, Flanagan said he’s not sure about a second season of The Haunting of Hill House. He does know, however, that the story of the Crain family is over:

I don’t want to speculate too much about season two until Netflix and Paramount and Amblin let us know if they want one. What I will say, though, is that as far as I’ve ever been concerned with this, the story of the Crain family is told. It’s done. I think that there are all sorts of different directions we could go in, with the house or with something completely different. I love the idea of an anthology as well. But to me, I felt like the Crains have been through enough, and we left them exactly as we all wanted to remember them, those of us who worked on it. We toyed with a cliffhanger ending and we toyed with other ideas, but ultimately, in the writers’ room and with the cast and everything else, we really felt like the story demanded a certain kind of closure from us and we were happy to close the book on that family.”

What do you think? Have you started watching The Haunting of Hill House yet? Would you watch a second season?

Absolutely! There are no good, scary horror-type TV shows out there. American Horror Story is filthy and wicked, and everything else is a stupid zombie show! Bring on Season Two!

I would definitely watch a second season

A 2nd season, a 2nd book
a spookier new story with a spookier LQQK
I’d love to see a 2nd season
I loved the 1st season is the reason

BRING IT ON NETFLIX!!

I loved the series but hated the ending!