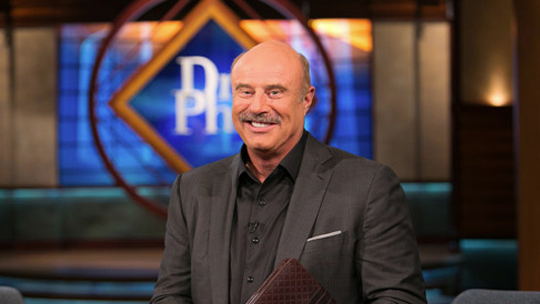 Hosted by Phil McGraw, the daytime talk show premiered in 2002 and airs on TV stations across the United States and internationally. Dr. Phil is currently in its 17th season.

Read more info about the renewal from CBS below:

LOS ANGELES – Oct. 25, 2018 – Dr. Phil McGraw, host and executive producer of the #1 rated daytime talk show DR. PHIL, has signed a multi-year deal with CBS Television Distribution to continue his eponymous show through 2023, it was announced today by Steve Hackett, President of Sales for CTD.

The new deal adds three years onto his current deal and will take the groundbreaking, most-watched daytime talker DR. PHIL through its 21st season. DR. PHIL has been the #1 daytime talk show on television for the last seven years and is currently in its 17th season.

“Dr. Phil is a titan of daytime television, setting the gold standard delivering clinically sound, common-sense, usable information to millions of homes every day. There has truly never been anyone else like him, and we are thrilled to continue our longtime relationship,” Hackett said. “His show continues to resonate with viewers whether he’s guiding a family in crisis or a celebrity struggling with a problem. We look forward to celebrating 20 years and beyond with Dr. Phil.”

“I am so proud to extend my relationship with CBS and CEO Joe Ianniello, our longtime supporter, and CBS Television Distribution led so passionately by my good friends and consummate pros Paul Franklin and Steve Hackett,” said McGraw. “Our success is all about team. Carla Pennington, my unbelievably talented executive producer since day one, leads the most talented and committed team in television, delivering quality, meaningful content every day for so many years. And perhaps the most important team member, my wife, Robin, who has been a part of the show since its inception and is such an invaluable touchstone for me personally.”

Over the years, the DR. PHIL show has received 31 Emmy(R) nominations and won five PRISM Awards, for the accurate depiction of drug, alcohol and tobacco abuse and addiction, as well as the MADD Media Award. In October 2015, Dr. McGraw was inducted into the Broadcasting & Cable Hall of Fame, an honor bestowed on the pioneers, visionaries and stars of the electronic arts.

Dr. McGraw is also an executive producer of CBS Television Distribution’s Emmy Award-winning daytime talk show THE DOCTORS, which is currently in its 11th season, as well as executive producer of the new syndicated daily talk show FACE THE TRUTH and the daily syndicated newsmagazine DAILYMAILTV, now in its second season. On the scripted side, Dr. McGraw serves as co-creator, executive producer and writer on the major hit CBS primetime drama series BULL, now in its third smash season, which was inspired by his early career as head of the nation’s most sophisticated trial science firm. His development deal with CBS Television Studios for Stage 29 Productions, run by CEO Jay McGraw, has several additional scripted projects lined up for CBS including MELANIE and CHAPLAIN. Dr. McGraw is also a prolific author with nine #1 New York Times best-sellers to his name.”

What do you think? Do you watch Dr. Phil? Are you glad it’s been renewed?

I’m delighted to learn that the show has not been canceled in the USA ! I was planning to urge a change of heart, if this had been the case. As a former licensed clinical social worker, now retired, but volunteering advice to others, I have learned much and continue to do so from viewing the show, so its not just for entertainment that I am pleased to see the renewal.

I love Dr Phil but I’m quite disappointed that they aren’t showing it in the daytime but quite late at night! Why was this decision made?

While we look forward to and enjoy Dr Phil, we are growing tired of and even annoyed by his sensationalizing his guests and topics. Also, we wonder about his crude language; he never used to swear. It isn’t necessary.

Would like to see Dr. Phil continue his show

Dr Phil is a great show please keep show on

Love Dr Phil show!!!! Shirley Lindley Thanks for all you do!!@yahoo. com

Soooooo glad Dr Phil has been extended. Love him and Robin!!!

I have been taping Dr. Phil for years. He is the most honest and knowledgeable person on TV, and I have used his wise advice many times over the years. At 73 yrs of age, I learn something new from Dr. Phil every day.

I’ve watched Dr Phil since Oprah.
I’m glad to hear he has renewed his show and it wasn’t canceled.

I have watched Dr. Phil ever since his beginning on the Oprah Winfrey Show. If I’m at home I never miss his show. Whenever his show is on my husband knows that he cannot speak to me until it’s over! Thanks, Dr. Phil, for so many years of helping thousands of people, including those of us at home.