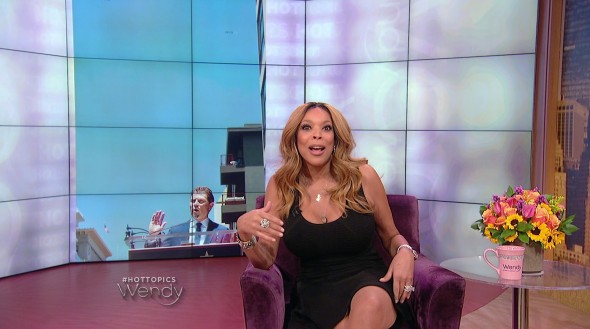 The Wendy Williams Show will be without its namesake for awhile. Deadline reports the host of the syndicated TV show is taking an extended break due to health reasons.

In a public statement, Williams announced she will be leaving The Wendy Williams Show temporarily to focus on her health. Last year, the host revealed she wad diagnosed with Graves’ disease.

The Wendy Williams Show will air repeats and new episodes with guest hosts during Williams’ absence.

From the Williams Hunter family:

As Wendy Williams Hunter previously shared, she fractured her shoulder and has been on the mend. Over the past few days, Wendy has experienced complications regarding her Graves’ Disease that will require treatment. Wendy will be under the strict supervision of her physicians, and as part of her care, there will be significant time spent in the hospital. Despite her strong desire to return, she is taking a necessary, extended break from her show to focus on her personal and physical well-being.”

What do you think? Do you watch The Wendy Williams Show? Will you keep watching during this break?

While not a fan of the show I hope the recovery went well for her.We all need a break to recover from things at times.

Not a fan so I don’t watch the show. But I don’t wish ill on anyone. Hope she recovers quickly.

I miss Wendy love watching her show, she is so down to earth. Get well Wendy, we all miss you.

Get well soon, love you

Hurry back ,Wendy. Love your show and miss you. Don’t leave us!

WENDY How you really doin? Prayers sent your way. You work hard 4 yours so get a little rest, but do not stay gone for too long. Peace‍‍✌️️️️⏳

No l will not watch reruns. I look forward to watching her daily with current episodes. I hope she gets the help she needs and can return. Otherwise, l will truly miss her. Also when able, l hope she “herself “ issues a clear statement for her fans as to what’s truly going on with her. We’re concerned!!! Lastly, some have commented that she’s getting what she deserves (which is awful to say) because of her topics about others. I feel that it’s her job, and how she makes her money, so it is, what it is!

That is not nice to say,”she gets what she deserved!” I’m going to be honest, I can’t do the reruns. I am praying for her, and leave her personal things alone people! We all know… ” How y’all doin”… Aweful! Get well Mrs. Hunter!, Haters are going to hate!

I will still watch the show but will miss Wendy. I will pray for well being and recovery!